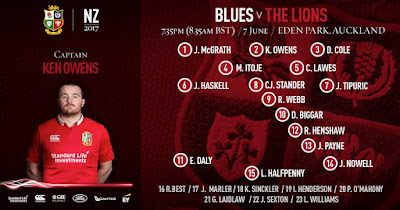 OK, I promise...I got out all my negative blogging about the Lions Tour out of my system last Friday.

Well, maybe just one more thing...
...the first match was a waste of everyone's time.  I had planned to give it the full writeup treatment but couldn't bear to watch it again.   What's that you say?  They were playing too soon after arriving in NZ?  Who's fault is that exactly?  The schedule was announced just under two years ago so there was plenty of time to see this coming.  Why not move it to the Sunday?  Or even the Monday night, given the team to face the Blues was going to be completely different anyway?

Anyway...apparently World Rugby have now "fixed" the calendar, so hopefully something like this won't happen again on the 2021 tour.

Right, NOW I've gotten all negative blogging out of my system....and that's even if you could call it negative; I'm not opposed to the Lions brand, it's just taking me longer than usual to get worked up about the tour this time.

Maybe this match will bring me in line?  We'll see.

The good news for the tourists is that of all our matches against New Zealand's Super Rugby franchises, on paper this is the easiest as the Blues are currently bottom of the Kiwi conference.

The bad news is that when you rank the records of the 18 Super Rugby teams from five different nations, the Blues still find themselves in the top half of the table.  That's how far ahead of the rest our hosts are even at provincial level.

But this is definitely an interesting XV that Warrenball is putting on the pitch in Auckland, mostly for Irish fans because it features Joe Schmidt's trademark "Henshayne" centre pairing.

JP will no doubt be keen to do well at a ground he's very familiar with, but it's more about how well these two have worked together for Ireland that could work in the Lions' favour (yes, even if Sonny Bill is able to play).  Having said that, I have a feeling the test 12 and 13 jumpers could well go to the likes of Ben Te'o and Jonathan Davies.

At halfback there's another pairing that would be even more familiar with each other, namely Rhys Webb and Dan Biggar from the Ospreys.  I'd have Webb in my test 23 for pretty much every category but where he loses out is his tendency to cross the disciplinary line way too often and could well result in cards.

When it comes to Biggar, after Sexton's below par performances, not just last weekend, this is an opportunity to nudge ahead in the pecking order, one which I assume is led by Farrell.  I still think the Leinster & Ireland man will be a close second after this match.

Elsewhere among the Irish starting contingent we have Jack McGrath and CJ Stander in the forwards...both well capable of "putting their hands up" as the saying goes.  Ken Owens being made skipper for this one could be an indicator that Rory Best is favoured for the tests.

Speaking of skippers, I haven't had the chance on this tour yet to point out my preference for Justin Tipuric as an openside flanker to Warburton...unfortunately for the Ospreys man the captain's armband should keep him out, though surely that's something he's well used to back home.

Finally I sincerely hope Peter O'Mahony is slated for a decent stint off the bench - he must be positively gagging to get out there after the disappointment of the Pro12 final.  I can definitely see him play his way into the six jumper if given the chance.

The bookies, no doubt reeling from their 30-40pt prediction last weekend, have the Lions 6 point winners at the time of writing.  I haven't seen much Super Rugby this season but I'm going to have some faith in this squad finding their tour legs ihere and getting some late scores to finish on top by about 10-12.

With the undefeated and Super Rugby leading Crusaders next on Saturday, anything less than a confident win tomorrow won't bode well, that's for sure.  JLP