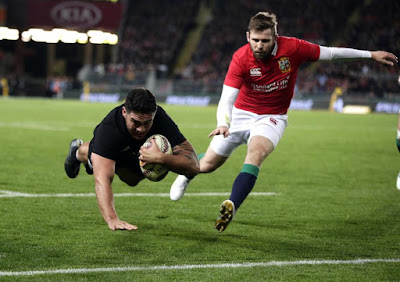 The thing that distinguishes Irish provincial rugby from the same level in other “Lions” nations is that every blade of grass on the island is represented by one of the four teams.

Even in Wales, where they are actually called “regions”, they can’t truly make that claim as all four clubs are located in the southern half of the principality.  So basically, once you can nominate a place in Ireland you call home, you are instantly put into a Harry Potter style “sorting hat” and given a team to throw your weight behind.

All of this means that on these shores we are well used to watching test rugby with strong prescription goggles favouring our neck of the woods. Sure, I'd say fans of Premiership teams would look out for their own players too, but going by the discourse on social media when England are playing, it's nowhere near as pronounced.

Now let's look at the Lions. Four nations of rugby players melded into one touring squad - a very similar concept to the Irish team. And the opinions on social media are every bit as biased. I wrote the tweet below with tongue in cheek, but that'd not to say it wasn't accurate either...

I guess what I'm trying to do is prepare you for my assessment of the first test. Of course I'm going to be more interested in how the Irish players got on.

For me, that is all nonsense, because what the All Blacks displayed more than anything else in Auckland was the "over and above" abilities they possess that sets them apart from the rest of world rugby.
Take that scoop by Beauden Barrett. Tell me one player on the Lions squad who would have that on their radar? The coaching manuals would say...if there's a loose ball and you're facing your own tryline, dive on it and expect your team mates to come to your aid - if they don't, that's on them. Not this All Black 10, however. His instincts told him this was broken play from which hay can be made, and he had the skills to back them up.

And how about Codie Taylor's ability to pluck a ball off his shoelaces to score their opening try? That's a hooker! And the thing is...had it been Dane Coles doing that, we probably wouldn't have been surprised as he often shows up in that position finishing scores. But his bloody backup can do it too!!!!
And how about that scoop by skipper Kieran Read ahead of the second try? Similar situation to Barrett in that he could have dived on it but not only does he see it as a chance to play on, he has the dexterity to lift and put it where his scrum half can start another attack. And what's more, Aaron Smith doesn't bat an eyelid as the ball falls perfectly for him to get things moving. Get it out wide to Ioane, boom.

The final try could be pinned on Johnny Sexton if you were that way inclined. He tried to get his own backline moving yet got stymied by the home D every bit as much as Farrell had before and just like that the ball gets pumped up field where it flummoxes all of the Lions back three (who were easily our best combination up to that point, to be fair) and Ioane helps himself to a second try.
Finally we have those infamous "dark arts". Have a look at the video below. Brodie Rettalick seems to effortlessly pinch the ball from a Lions maul following the lineout. When you watch it again and again, it becomes more and more clear that he has taken his hand off the ball following the jump and enters the maul from the side. Yet neither ref Jaco Pepyer nor the better-positioned Romaine Poite sees it that way.
Don't worry - it's not my intention to suggest the officials caused the result. But reports are that Johnny Sexton told Peyper "You're giving them everything" towards the end and I know what he means. It's not that I think they're "fixing" it for the All Blacks, more that the gravitas that comes with the jersey makes them inclined to give them more benefit of the doubt than others.
My overall point is that the ability to "sell" what they're doing is another string to their bow. That lineout certainly wasn't the only instance...for example, before the Taylor try there was a ruck won thanks to Joe Moody sailing off his feet over the breakdown and tumbling on the other side. No call.
Still, it's not like the Lions didn't show any skills. Our try was awesome. And here's where I don my nation's goggles...I think the try was officially started by an Irishman! Because if Conor Murray doesn't raise his arms as Stuart Hogg runs by him against the Crusaders, the Scot doesn't fracture his cheekbone and thus would almost definitely be starting this first test ;-)
OK, OK, maybe that was a bit of a stretch...in reality, the broken play move was absolutely superb. Naturally I was most impressed by Sean O'Brien chugging his way up the length of the pitch to be there to dot down. English fans will no doubt mention Elliott Daly's involvement, knowing he wouldn't make it up the line and thus staying in play and using his support.
I guess Welsh fans would have the most claim for the score though, given it was begun by Liam Williams and continued by Jonathan Davies. The truth, of course, is that it was an outstanding team try that showed how well these top-level players can perform together.
But here's the problem. That was but one try, and that does not an historic win over the All Blacks make. Ireland needed five of the damn things back in November! (Yes, I mentioned it again. I'll take any chance I can get!)
There were several other times the Lions worked their way into the All Black 22 only to be halted by a knock on, solid scrambling D by the home side or not-so-legal scrambling D by the home side. Maybe, just maybe, if the ref had his cards with him there may have been a bit more space for them to finish one of the chances but even that isn't guaranteed.

I may be negative about this tour as an overall concept, but I wouldn't go so far as to find fault with absolutely everything. Still, try-scoring was a definite problem for this particular group of players in the warmup matches, and unfortunately it was one they couldn't fix before the test series.

The funniest line I heard all morning came from the Sky commentator Miles Harrison after Rhys Webb scored his late, late consolation try...


"The Lions do have something to take into next week and that's very important!"

Of course I understand a TV network has to hype a sport to the max to get as many viewers as possible, but I hope they seriously don't expect us to believe a try that reduces a losing deficit from 22 points to 15 gives any indication that this series is somehow still alive?

The only repercussions from that score are going to be for Scott Barrett who will no doubt be reprimanded by his perfectionist coaching staff for not making the tackle to stop Webb from scoring.

Right.  That's enough about this match.  You can probably tell I'm not holding out too much hope for the final two tests, but truth be told I'm not exactly too down about it.  Like I said at the start, Ireland is my priority and they have had a decent showing in their tour and I'll enjoy writing up their victory over Japan a lot more tomorrow.  JLP

PS - for a much more positive spin on the tour, keep up with the excellent diary posts from Michelle Tobin who is lucky enough to actually be down in New Zealand for the duration!

Moment from #NZLvBIL that spoke volumes IMO. Brodie Retallick collects a turnover on Lions maul like it's a bottle of Coke out of a dispenser. He knew exactly where it was going.
A post shared by HarpinOnRugby (@harpinonrugby) on Jun 25, 2017 at 1:06am PDT