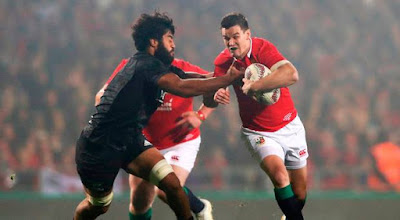 The ruggersphere appears far more interested in Warren Gatland’s call-ups than it does one of the ten matches on the tour, so I’d best harp on that first for this writeup.

It seems the consensus opinion is that calling on four Welshman somehow “devalues the Lions shirt”.  Interesting that it took this decision to bring out that soundbite.

Should it really take concern for the tour’s carbon footprint after tacking on a few midweek benchwarmers to bring out all the harrumphs from the game’s glitterati?

What about scheduling the first match of the tour the same weekend as the Top14 final and just one week after the Premiership and Pro12 finals?  What about naming exactly the same coach and captain as four years ago - if those roles are such a prestigious notch on one’s bedpost then shouldn’t it be somebody else’s turn this time around?

For me, each four-year cycle between tours brings the concept further away from the generations that appreciate them for what they were in their heyday.

If it continues in its present form, we’ll eventually reach a point where no amount of Sky Sports montages, angry columns from local journos like Mark Reason or test coaches sniping through the media is going to make this any more than what it is...an unnecessary burden on the modern day professional rugby calendar.

The answer must be either find an extra week or two so the squad have more preparation time to live up to all the gravitas and hype, or simply let the whole thing fade away into the history books.  Mini-rant over.

Like I have always said, once the actual rugby is going on it’s easy to forget all the off-pitch squabbles, and this was another impressive enough display from the tour’s “weekend team”.

I’m pretty sure the Lions’ assorted Kiwi opponents are operating on a “hive mind mentality” and you can see their approach evolve with each match.  This time, unfortunately, I’m not so sure the Maori All Blacks had the right mix of players able to stay with their guests for 80 minutes.

Still, despite the fact that Sexton was doing well to march his backline up the field in open play with the right mix of moves, once they got into the 22 it was difficult once more to find a way through the scrambling defence, and if we can’t manage to fix that to come away with at least five points each time, our chances for the test series could get downgraded from “slim” to “none”.

But when analysing the match in isolation, it’s hard to be too negative with the exception being the mix up between George North and Leigh Halfpenny that led to the Maori’s only try.  Deserves a mention but given how the remainder of the match went, we can call it a “blip”.

Another thing holding back on the tourists was the refereeing of Jaco Peyper.  Far too lenient on the home side, always seemed to be one step behind where he should be on each infraction...if it looked like there were enough penalties for a warning he’d say nothing, by the time he actually gave a warning he should have been brandishing a yellow, and after he finally did, when the penalties in the 22 continued, he didn’t go to his pocket again.

But still the Lions led by Peter O’Mahony found their way to the try line twice, albeit with the benefit of the man advantage.  Tack on seven for seven off the tee from Halfpenny and the result really wasn’t in much doubt even though the scores were close as late as the 50th minute.

I wouldn’t look to make too many changes to this match day 23 as they seem to work well together.  Even without my Irish goggles I just wouldn’t have the heart to change a back row of O’Mahony, O’Brien and Faletau the way they are playing.  If I had to add a Welshman for the sake of him being captain, it would be Alun Wyn Jones though I’d keep Kruis on the bench.

Should Owen Farrell be fit, I would actually play him at ten and Johnny Sexton at 12.  Yes, I know that’s far from conventional but that’s one of the reasons I would do it.  For me Sexton is perfect for a specialist role that combines a “second five eighth” type 12 and the strong-carrying type that befits Warrenball.  Plus he and Faz could switch places in different situations to keep the All Blacks guessing.

But that’s just me.  I’m sure Gatland & co have a plan and we have seen as the Saturdays have progressed on this tour that his test side is taking shape.  Who’s to say they can’t do some damage in the series.  Yes, the home side will be ready and waiting for them, but as Joe Schmidt’s side showed in Chicago, they are not unbeatable.  Yes, I was very happy to have an excuse to remember that match!  JLP
at June 19, 2017