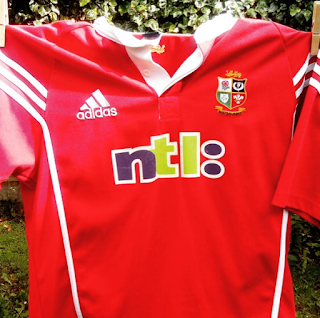 Back in August 2016, just before the European rugby season kicked off, I altered the wording in the top banner on this page to read what you see now - “Leinster, Ireland and Lions Rugby fansite”.

And going back to the last tour, for the duration of the 2012/13 season that preceded it, we ran a series of weekly posts which involved a panel of bloggers, one from each nation, taking turns updating their ideal test XV each week.

Throughout this season just gone, however, I have to say I simply have not been feeling it.

Is it because it’s the All Blacks and there’s every possibility of a tour tonking and not only in the tests?  Is it because of resentment/weariness over the same choice of coach and captain for the tourists?  Is it bitterness that I can’t take the time to travel to New Zealand myself?  Or is it that I’m experience a mental fatigue with matters rugby that must be similar to the physical one felt by the players after such a long season?

Well some of the above could play a factor, but it definitely isn’t the last one, and I reckon the proof of that shows the overall reason.  Though the Under 20s fell short last Wednesday against Italy, I really enjoyed watching the next crop of talent do their thing so there’s nothing wrong with my appetite for rugby.

I guess my apprehension stems mostly from a reluctance to stray too far beyond my “Leinster & Ireland” remit, and with Joe Schmidt & co heading off to the USA & Japan, plus all the hype and hoopla surrounding our RWC2023 bid plus the much more imminent WRWC2017, it’s hard for me to place the Lions at the top of my pecking order right now.

That’s not to say I have anything against the other Lions nations...it’s just much of what makes me a fan of this wonderful game is my support for my home province and country, so hopefully that’s enough to explain where I’m coming from.

Or to put it another way...the Lions jersey you see above, from the 2001 tour of Australia,  is the last for which I paid full price, and if you think I’m stingy when it comes to “merch”, you can have a look at my wardrobe where I have more than enough of Leinster & Ireland items to keep me going.

Naturally I wish the squad nothing but the best down there over the coming weeks and it is a great honour for them to be selected and no doubt it will be an experience they will never forget, but in a way that’s kind of my point...is it really all about a three-test series or is it more about the honour & experience?  With each tour, especially with so much week-in, week-out rugby in between, I think more that it’s the latter.

So let me sum up my view like this - when the Lions are playing their ten matches I’ll be all “Yay!!!” but in between, I’ll probably be “Meh.”  Sorry, but I’m just being honest.

Obviously there are many who disagree and there’s plenty of room for that opinion too here on HarpinOnRugby...in fact, one Irish Lions fan who has made the trip will be sharing her experiences with us and I’m very much looking forward to those posts over the coming weeks.

Besides...if you think my touch of indifference is going to stop me harping on the Lions anyway, you clearly don’t know me!!!  Let’s look at match one shall we… 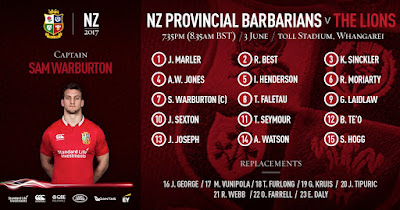 Note - You’ll notice I’ll be focusing mainly on Irish players in my previews and writeups over the coming weeks.   Further to what I said above, I’ll leave it to the “mainstream” media to wear the “impartial” goggles....mine will tend to be green.

When it comes to the Lions’ chances on this tour, for me it boils down to one question and one question only...have we gone down there to play Warrenball?

If so, and we don’t show much flexibility from that type of game, we’re pretty much doomed.  But I’m holding out some hope that Gatland wouldn’t have taken the job if he didn’t have some kind of framework in mind for the World Champions, so surely it must involve a level of “unexpectedness”.  Having said that, with Te’o and Joseph as his first pair of centres, there will no doubt be much crashing and boshing to look forward to.

And while this opening match is arguably the “easiest” of the trip as our opposition features mostly players from New Zealand’s provincial competition, Gatland’s own selection looks as though he is keen to look at potential test combinations right out of the gate.

Johnny Sexton gets the start at outhalf.  One of the biggest debates has been over whether he or Farrell should get the overall nod, with the Englishmen playing at 12 available as a handy compromise if required.  Personally, I’d go for the compromise with a different coach but I can’t help feeling that Farrell is best suited for Warrenball.  Well, here’s Johnny’s chance to prove me wrong I guess!!!

Iain Henderson is one I reckon can really make a name for himself on this tour.  He didn’t have his best season in Europe, but the change of surroundings could be the making of him.  He’s a real “I don’t care who else is around me I’m going to show what I can do” kind of player and this is a real chance for him to show it.

As for Rory Best, I reckon the test starting berth is his to lose so he’ll be looking for a steady performance here to get himself settled...no bother to him after all he has done since taking over as Irish skipper.

Last but not least among the Irish contingent, we have Tadhg Furlong on the bench.  I can see him putting in a man of the match display before the tests roll round...this probably won't be one of them but he is definitely the kind of player Warren will want against the All Blacks.

Elsewhere in this team, it will be interesting to see how the back three get on...assuming the home side will be kicking back a lot of ball under pressure, there could well be opportunities for them to make a mark.  Popular wisdom seems to dictate that Stuart Hogg is the only Scot likely to feature at test time but I wouldn’t rule out Seymour either.

When it comes to the make up of the Provincial Barbarian side, a couple of names stand out...prop Oliver Jager played in the Leinster Schools Cup for Blackrock College while out half Bryn Gatland is facing a team coached by his “aul fella”.

OK now for a prediction.  The bookies see us winning by 34.  I’m going to err on the side of pessimism and assume the travelling and the “getting to know you” process might lead to a couple of late tries for the home side which could keep the margin down to something around the mid twenties.  JLP