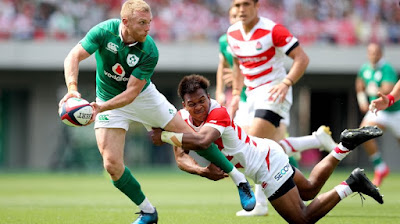 It was a scorcher of a weekend here in Dublin, with Father’s Day as an added bonus, so how on earth could I possibly find fault with another comfortable win for this Lion-less Irish squad?

Plus with Warren's Wanderers playing Saturday and Tuesday and the “Wolfpuppies” wrapping up their World Under 20s campaign in impressive style on Sunday, there’s a lot of harping to be done so what say I keep this writeup simple and focus on describing the seven tries?

The home side were disappointing overall as the scoreline suggests...there was the odd backline move and defensive stand that impressed but they were very odd.  We did let them in for a few tries in the final quarter to give their side of the scoreboard some respectability but I’ll leave it to Joe to analyse and berate.

When it comes to individual displays I have already highlighted Earls and Conan and otherwise it has been more about how the team plays together that has stood out.  Rory Scannell has done well with his opportunity to provide an option for a 10/12.  If I had to pick someone out for criticism, I did notice Quinn Roux involved in the odd SNAFU over the two matches, but then again he also clicked well with the group at other times so that may be harsh.

Overall this has been a good couple of run outs for this touring squad and the results to date have given them a definite target for the final test next Saturday - go out and make it three fifties out of three if you can.  JLP