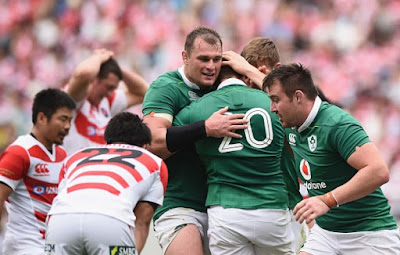 THE END OF THE BEGINNING

I will literally take any excuse I can get to bring up the fact that Ireland beat the All Blacks for the first time ever back in November.  In fact, I already have this weekend in another post, namely the writeup for the Lions' first test in Auckland.
Now I have an even better excuse, as this match against Japan represents the final match of Ireland's 2016/17 test campaign, of which that bit of history in Chicago was the first.

In my preview I challenged the Irish lads to make it not only three wins in a row, but also make it three "fifty burgers", so I suppose the fact that they fell short by more than a couple of tries means that my writeup should be mostly negative, right?  Wrong.

The Lions piece was all the negativity I can take in one weekend - besides, there is definitely plenty to be positive about in this match, particularly when you put it into context.

When Ireland play Japan in our World Cup pool in 2019, I would be absolutely delighted with this performance and outcome.  Remember - Japan will be the hosts, their fans will be looking for an upset to match their own historic win in 2015, and Joe Schmidt will probably need to field a matchday 23 not a million miles away from this one with squad management in mind.

So overall, I can't be anything but happy.  Sure, we found our hosts difficult to break down in the second half, but to focus on that would be an insult to them as they definitely posed a much bigger challenge than the week before.

And one thing is for sure...we can't make any excuses about being tired after a long season.  Yes, it IS a long season.  And yes, as the clock ticked down with victory guaranteed, the thoughts must have been creeping into the players' minds that the "holliers" weren't too far away.

But to be fair to the boys in green, from starters to subs they played that final quarter like they were a group of players who knew their coach would be on them at the Monday DVD session for any signs of fatigue, which of course is what they were.  In fact, I reckon they were unlucky not to get closer to my fifty point target due to a couple of botched finishes by Conway and Marmion (the former could have been a pen try).

For this reason I'm harp on the fifth and final try more than the others as I feel it was the best of the bunch.  The score was finished very well by Sean Reidy in the 78th minute but to get a real sense of what happened you need to go way back as the Irishbuild up was about as "Schmidtball" as you can possibly get.

The "Brave Blossoms" had us under a good deal of pressure in that second half but apart from their lone try in that period which came after a fortunate bounce (though to be fair they did deserve it), our defence was pretty solid.

We began the try-scoring "drive" thanks to some good carries to help us "exit" from our own 22, one of which was made by James Ryan, who gets his own paragraph or two and despite getting a mere half hour of play was my man of the match.  It seems Joe doesn't believe in breaking in promising rookies gently...Garry Ringrose has had a long stint in the 13 jumper and from the moment Ryan took the field it was clear he was slated to do much of the heavy lifting and he certainly didn't disappoint.

His stats over that half hour were ten carries for a gain of 27 yards, all of them of the "hard" variety.  Throw in four tackles and that's quite a shift for a youngster's second test cap, especially considering he hasn't even togged out for Leinster yet!  Hopefully he'll be doing a lot of that for the season to come.  Anyway...he kickstarted this try-scoring series with another strong run out of the 22, ever looking for the offload as he went before eventually recycling.

Then came the good old-fashioned box kick, this time from Paddy Jackson.  It's not easy to do well at this skill when you have played with Conor Murray (who's hang time is so good the ball comes down with moon dust let alone snow) but this was a decent one, and when Andrew Conway's attempt to catch was illegally blocked, we had a penalty to set us up with a line out around their 22.

Enter the standard Joe Schmidt "power play".  One off the top gets to scrum half John Cooney (another new cap on this tour though he only got a few minutes) and he fires a sizzling flat miss pass into the path of Luke Marshall, who had his best 80 minutes in an Irish shirt for quite a while.  His crash ball puts us into their 22.

Side note on Marshall...I totally get it was very hot in Tokyo's Ajinomoto Stadium but if the likes of the Ulster centre and Josh van der Flier feel they require scrum caps, there should be an option for them to wear in these conditions as well.  Just saying.

Anyway...Marshall's crash ball gets us into their 22 where we quickly recycle - Cooney takes it from the base and Sean Reidy has a good line to take it - he offloads to his fellow sub Niall Scannell in support who promptly pops it back to him.   The Ulster back row has over ten metres to get to the line and has tacklers trying to stop him but they can't.

Maybe that was a lot of words for one try but for me it was a quality all-round score no matter what the opposition and a good way to round off a year of test rugby.  We even managed to get back at them again as the clock ticked over 80 but couldn't quite get over for try number six.  I can find it in my heart to forgive them for this.

Our other four tries came in the first half hour and all but killed the match as a contest.  The first illustrated both Japan's strengths and weaknesses all at once.  They were clearly determined to come at us from the off and an amazing counter ruck turned us over on our first possession.  In their eagerness to get it over to the other side of the pitch however, a pass from Matsushima went astray and Garry Ringrose was on hand to pounce on the loose ball and bring it the rest of the way.

The next three Irish five pointers came from van der Flier, Marmion and skipper Ruddock, all well finished with good technical work across the team in the build up each time.  You could almost say that this match was similar to the Lions test in Auckland in that it was clear the losing side had talent but just couldn't quite get it together and finish off chances as well as their opposition.

From the other Irish performances, I thought Paddy Jackson was ok overall - maybe got himself isolated in tackling a Japanese lock ahead of their first try but that doesn't take from the fact that he is Ireland's nailed on back up to Sexton right now.

Keith Earls was quiet on this occasion but he and Jack Conan are definitely players of the series for Ireland, with honourable mention for Rhys Ruddock who did very well with his captaincy role.

So have we benefited from this tour of USA & Japan?  Absolutely, I say.  Sure, there were glitches in spots but nothing that can't be worked on.  There were some new caps, the systems appeared to be working well no matter who was on the park.

My only qualm is pretty much the same as it has always been - it's great that we play to an ethos and it has been very effective at times, like this season in Chicago (see I mentioned it again), against the Wallabies and in our Grand Slam denial of England.  I just think we need to be wary of teams who actually come out to thwart us as opposed to playing their own game, and it wouldn't hurt having a few extra tactical strings to our bow.

But there's plenty of time to work on that.  Two more Six Nations campaigns, two more November series and next year's summer tour (which I'm personally hoping is in New Zealand) gives us plenty of time to be ready for our assault on RWC2019.

In the meantime, there's barely time to take a breath for us rugby nuts...tomorrow's final Lions midweek match, two more tests, the climax to Super Rugby and of course the Women's RWC will see us through the summer months before hey presto we're back to harping on Leinster again!  You won't see me complaining...  JLP
at June 26, 2017