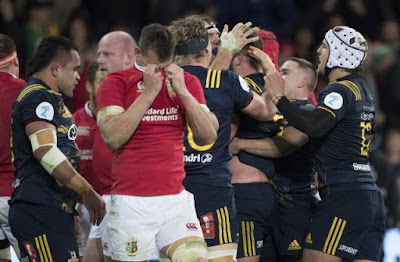 Obviously, this result is bad for the Lions overall.  Two defeats in the "warmup" matches means they must win at least one of the tests to stand a chance of posting more Ws than Ls on the tour.

And after an impressive 80 minutes of defence in Christchurch, the two tries scored by the Highlanders won't make for fun reviewing in the DVD room.  First, although Waisake Naholo was man of the match and took some stopping, his finish was all too easy.   On the second, I can't understand why the likes of CJ Stander and Iain Henderson stayed out of the maul, not working out that they were driving for the line rather than having someone peeling off of it.

That said, I still don't think this is was an occasion completely without positives.

First and foremost, we have to remember that this was "the midweek team".  Sure, some are likely to feature in the test 23 but not many.  It was an occasion for "putting your hand up" which probably lessens the chances of a full-on team effort.

Also, the tourists would have won had it not been for three regrettable decisions late on.  First there was Owen Farrell taking a penalty literally within seconds of taking to the pitch.  Maybe Biggar was injured and couldn't take the kick before leaving the pitch but what about Elliot Daly?   I've never played outhalf but no matter how accomplished someone like Farrell may be, if at all possible I'd rather have someone taking a kick who is tuned into a particular match.

Next there was the decision to move Daly back a metre or two before his placekick.  The officals need to establish a mark and stick to it.  Even though Daly is well able for long distances and actually only missed by a whisker, the interruption to his preparation could well have played a factor.

The above two points are mostly trivial, niggly details, but this final one is real IMO.  With the clock about to go red and having won a penalty giving us a lineout just outside the Highlanders' 22, we had a gilt-edged opportunity to either set up a drop goal or force a winning penalty.

Instead, Farrell tries a high-risk pass to Joseph which gets spilled to hand the victory to the hosts.  The ONE time that I would have actually applauded a bout of one-off runners, we went for the tough option!!!  The only time there should have been air under the ball in that sequence was after Ken Owens let go of his dart.

But my point is that the match was definitely winnable, which in turn means there were positives.  Like the defensive structure, which was solid enough despite the two tries, plus the fact that the 2015 Super Rugby champions kept a fast tempo throughout and did everything they could to stretch us.  Robbie Henshaw once more was very good in policing his channel I thought, as well as a tad unlucky not to stop Nadolo's try thanks to a quasi-legal block.

Plus we actually scored three tries, don't forget, which was something the "weekend team" didn't manage.  One was a great move along the backs with Biggar twisting his way into space and Joseph, my pick of the Lions, powering over.

The second try was an excellent read by Tommy Seymour, who struggled against Naholo for most of the evening but did very well to pinch a "kick pass" in full stride.  Finally after a bit of strong running by Henderson up the middle it was Warburton bringing it the final few metres for our third.

On the squad captain, he was a bit unlucky in the first half as referee Angus Gardner was inclined to apply "southern hemisphere" interpretations to his attempts to force turnovers but still Sam was quiet overall.  He got more into the game in the second half and of course got the try...that could be enough to convince Warren he's ready to lead out the test side, but not this blogger for what it's worth.

From the Irish contingent, I have already harped on Henshaw and Henderson...Best had another good day at the breakdown, CJ Stander's carries weren't as effective as we're used to (though that relies heavily on the clearout support with him), and Jared Payne probably didn't do enough at full back to get ahead of Leigh Halfpenny now that Hogg has been so unfortunately ruled out.  Finally, Jack McGrath could well be tagged for a couple of scrum failures towards the end, one of which led to the winning penalty for the Highlanders.

That's pretty much all I'd have to say about a match like this - yes, a disappointing result but not exactly devastating for the tour as a whole.  A decent win for the "weekend team" against the Maori All Blacks and all will be forgotten.  JLP
at June 14, 2017