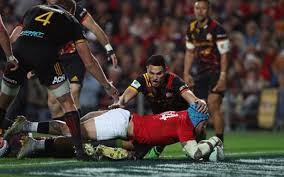 It's not often we write up a match here at Harpin Manor on the same day as it was played...normally it takes us two looks, one as fan and one as nerdy note-taking analyst before the words can flow.  This one doesn't need the second look, nor does it need a lengthy piece.

Dear Lord, how awful were the Chiefs?  I don't say that to be mean.  I say it because there was a line of expectation regarding the NZ Super Rugby franchises, it was well beyond what's considered normal at this level, yet the Waikato-based outfit fell well short.

To be fair to them, they were missing a lot of regular players.  But still...if you didn't know the teams on the pitch and someone told you one had been together since the turn of the new year and the other was thrown together only a few weeks ago, they'd have gotten them wrong.

No lineout, no scrum, no protection for ball carriers at the breakdown.  If that's where you're at, you might as well stay in the dressing room.

But enough about the hosts.  As the saying goes, "You can only play what's in front of you".  This "midweek team" did that rather well.  And funnily enough, one of the coaches who will be most satisfied with this match could well be Joe Schmidt.

Even though the Ireland squad is in Japan, the bedrock of Joe's approach since BOD hung up his boots has been what I call the "Henshayne" centre partnership, and for the second time on this tour they had a prolonged spell together guarding that channel, and try as the Chiefs might, there was no way through.

Of course that's not ALL down to a team's 12/13 combo, I know this.  Having a hungry back row to pilfer some ball kind of helps too, and the turnovers were aplenty at the breakdown.

In the pack I thought Henderson has gotten better as the tour wore on and he was unlucky not to be credited with the score which was given as a penalty try.  CJ Stander did all he could to get the most out of each carry but despite the quality of players around him they just seemed a fraction off the timing he required for the right support.

As for Rory Best...I just think the boxes he ticks so brilliantly for Ulster and Ireland, like team leadership and breakdown prowess, are ones that are already being looked after elsewhere in Gatland's thoughts.  I reckon he wants a starting hooker who will be reliable on set pieces and give extra bang for their buck with some carries, and he has other options for that.  Hopefully Rory can make the bench though.

Not much else to harp on methinks...the back three of Sanjay, Nowell & Daly all showed what they can offer though I'm not sure it will be enough to get them into Saturday's starting fifteen, maybe Daly.

On the minus side, there was Joe Marler being, well, Joe Marler.  I full expected the match to turn at his sinbinning but like I've said the home side weren't up to it.

Right, that's all the preamble done & dusted. Time for the "real thing" to begin at the weekend. On all the top betting tips sites like biggestfreebets.com, the All Blacks are heavily favoured. What do I think?  Head says we've no chance. Heart says, er, maybe we have some chance.  JLP
at June 20, 2017