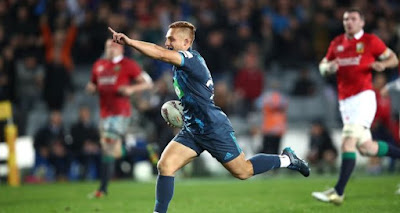 For my first post about this Lions tour, I was pretty negative about the whole concept, basically pointing out that my interest decreases with each four-year cycle.

For my second, a preview for this match, I acknowledged the negativity and tried to walk back in the other direction, finding a 10-12 point victory for the tourists after going through the lineup.

Where, if anywhere, can I go from there after what happened on a rainy night in Auckland?

Following the Barbarians display, there was much spin along the lines of “well, you have to allow for the fact that they’re only off the plane”.

Following this display, there has been much spin along the lines of “well, you have to allow for the fact that the squad is still getting to know one another, plus the likes of Jack Nowell, Liam Williams and Peter O’Mahony will have had extra time off because of the Pro12 & Premiership finals”.

I’m not dismissing those excuses completely, but they do lead me to much broader lines of questioning about the tour and in turn the overall rugby calendar, so I’ll steer clear of those topics for now as this is meant to be a match writeup.  Having said that, since we’re meant to believe that we are yet to see the Lions at their best, there’s only so much I can say about the performance against the Blues so I’ll have to keep it brief.

For me, the difference between the two teams came from the respective number 12s.

That may sound like I think Robbie Henshaw had a bad game, but that could not be further from the truth...he was one of the best Lions on the night from where I was watching.  But he was still outshone by his opposite number, and the Blues’ superb match-winning try showed exactly why.

It would be easy for me to say that the score from Ihaia West was typical of a southern hemisphere side...strong run from number 8 Lautua, a burst into space from Sonny Bill Williams before his own cheeky offload gets it to West who is already running at full pace to take him past several Lions, many from the bench, to the line.

But tell me this...would you have been surprised to see a move like that from the 2016 Pro12-winning Connacht side?  The part of Lautua starting the move played by John Muldoon, the part of West sprinting to the tryline played by Matt Healy and, ironically, the part of Sonny Bill played by Henshaw himself?  Me neither.

And here’s more irony...that Connacht side was coached by former Blues coach Pat Lam.  But still it’s just about where people come from, because the 2017 Scarlets were capable of a similar score (Lautua/Sonny Bill W/West become Barclay/Scott W/Steff Evans).  Basically it all boils down to the mindset and I reckon we have a tendency on our side of the world to coach the attacking mentality out of our players when they reach test level.

Still, like I said earlier, I thought Henshaw played well, though most of this is based on his defensive positioning off of set plays (where he would have relied on Payne) and his ability to grubber the ball through for a territory gain when all other options were off the table, something which happened quite a bit.

It’s not like there weren’t other positives over the eighty minutes...for example, I liked Rhys Webb’s involvement - I reckon he does well once he doesn’t overdo the aggression.  But when it came to attacking rugby, whether it was the personnel outside him, the overall mindset of the team or a combination of both, let’s just say a try like West’s was simply never going to happen.

The lone Lions try was good in and of itself, good carrying from the forwards eventually finished by Stander in a manner we have seen for Munster and Ireland so it’s no surprise he can do it for the Lions as well.  What takes from it is the fact that it was the “lone” try.

The fact that the Blues had a slice of luck or two cannot be ignored...for example while they had done well to force a penalty to end the first half, for it to result in the bizarre series of events leading to a try couldn’t have been predicted by anyone.

Plus, I thought referee Pascal Gauzère was both inconsistent and indecisive which didn't help either side.  Having said that, the Lions made some questionable decisions on the disciplinary front, not least of which was Liam Williams’ double jump jeopardy.

My final talking point surrounds lineouts and how we analyse them.  I think as rugby fans we need to come to a consensus.

When a lineout goes awry, especially one in the dying second from a team less than 7 points behind, many lay all the blame at the feet of the hooker while others go out of their way to point the finger elsewhere, and more often than not provincial or national bias plays into it.  However “boring” it may seem to avoid choosing sides, I still believe the real answer lies in between.

The modern lineout has become a machine of several moving parts - the dart, the lift, the jumper’s technique in the air, even the original call itself.  And since it is all protected by the sworn secrecy of the forwards’ cosa nostra, all the replays in the world couldn’t tell you for sure what was intended when things go wrong.

So how about we just say “they made a balls of it”.

And while we’re at it,  we can extend that statement to the entire performance and hope for the sake of the Lions tour (both this one in particular and the concept in general) that they can make the most of the extra time together between Auckland and Christchurch where many consider their clash with the Crusaders as a “fourth test”.

I saw a comment in a thread which described the tour as a “manbabe junket” - definitely a great soundbite which really puts it up to the tourists to prove it to be wide of the mark.  JLP
at June 08, 2017