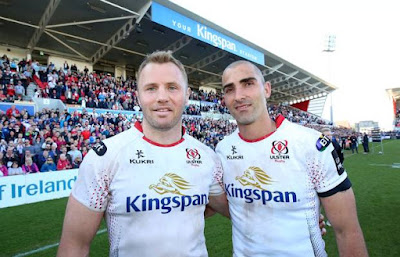 Ulster the home team against Leinster in their final match of the season, with a legendary import making the final appearance for his adopted province.

Actually I’m talking about the 2013 Pro12 final - sure, Ulster were only “technically” the home team and sure, Isa Nacewa was to eventually return to Leinster, though we certainly didn’t think about that on the day.  Maybe the circumstances were different to those surrounding Ruan Pienaar, but let’s just say they weren’t so much apples and oranges, rather different types of apple.

This fixture on Saturday had nothing riding on it as far as the final standings were concerned - Ulster needed a mathematical miracle to reach the playoffs and perhaps 1st place was at stake but every Leinster fan will tell you that’s a victory that can be made hollow a few weeks later - we had our home semifinal and we were happy with it.

So whatever about the debate surrounding the departure of the Springbok, this being both his and Roger Wilson’s final match was always going to be to the fore, and it certainly showed in both the tenacity of the home defence and the even more vocal than usual support of the home crowd.

Yes, I know that sounds like sour grapes (apples?) from a fan of the team that lost on the day; maybe it is a bit.  But the reality of the European rugby calendar is such that however much we’d love to believe any two teams on any given day will be equally up for competing to the max, context can never be ignored and I’m simply trying to provide some.

Much has been made of the failure of the Ulster lineout in this match - seven lost on your own throw never looks good on the stat sheet, but then again many of the numbers would appear to point to a Leinster victory yet that is not what happened.  As well as set pieces, we also had a clear advantage in territory, possession, metres gained, we conceded 5 fewer pens, and we had to make about fifty fewer tackles.

So what we need to do is examine just what we did with all that supposed advantage, and it started on the very first Ulster lineout.

We did well on our first possession getting to their 22 with phases after the kickoff before a penalty in front was slotted by Joey Carbery, but from that restart they came right back at us until Noel Reid intercepted and all he could do was step into touch.  He had the ball stripped off him by Pienaar who looked into the possibility of a quick throw...Reid then took it back.  For me, that puts you in yellow territory, though given the early stage of the match it probably would have been harsh.

The net result of Reid’s action was still bad for Leinster though, I fear.  A team that was already pumped up found themselves more so, and even though Hayden Triggs was able to soar and swat down the dart, Roger Wilson was quickest to pounce on the loose ball and thus they were right on our line, even better off than they would have been without the steal.

From there they rumbled through the phases, winning a penalty yet opting out of another lineout before pressing some more off the scrum and eventually, and fittingly, it was Wilson who crashed over the line.

The rest of the half was pretty much all Leinster - we had little trouble advancing the ball and we continued to make mischief on their throw, yet once we got into their 22, our road to the line was halted either by a penalty or some quality breakdown work by the Ulstermen.

And although Noel Reid has done well overall this season, he kind of had a hand in all the home side’s first half points, with a silly penalty in a central position allowing Paddy Jackson to kick for the posts to stretch his side’s lead back to four before the break.

Ironically it was a functioning Ulster lineout which provided the platform for their second try.  The catch was taken at our 22 and the maul got them halfway to the line before combination of probing phases by the pack and quick passing along the backline stretched our defence this way and that until Pienaar spotted McFadden had been tempted off his wing; he executed a perfect kick pass which Trimble took to dot down.  A sublime touchline conversion from Jackson made it an 11-point cushion for the home side.

Those were to be Ulster’s last points of the day at the 56th minute.  And while overall it was a disappointing display for Leinster, our response does deserve a measure of credit.  We won back the resulting kickoff and powered our way towards the try line in similar fashion to Ulster minutes before.  Eventually Cian Healy thought he gotten the ball down but after several reviews the officials called it held up.

In my preview I fancied our chances in the latter stages with what I thought was a superior bench, and it certainly showed in our front row.  By this stage we had Healy, Strauss and Furlong up against Ulster’s starters who had done a lot of tackling all evening.  The scrums had been even up to this point but now we clearly had a nudge on, and three successive penalties gave us a penalty try which put us right back in it.

But sadly those were to be Leinster’s final points of the match.  We continued to press the Ulster defence for the remaining minutes but we still struggled when the final ten or so metres were within reach.  Once more I feel I must point to our 12 channel - Robbie Henshaw would probably have provided a much better option.

When we won a penalty from another scrum at one stage, the fourth in a row on our own put in, I thought a yellow card was warranted although the way things were going, there’s no guarantee we would have scored even with an extra man.

Joey Carbery has had a rookie season that will surely take some beating but on this occasion he was clearly outplayed by his more experienced opposite number.  While the lost lineouts will have imprinted on the memory of Ulster fans from this match, Carbery’s hurried passes into touch in the final moments did the same for me, though credit must go to the pressing defenders that forced them.  I dare say the onlooking Joe Schmidt had his pecking order for the upcoming tour of the USA & Japan pretty much determined for him.

But come the final whistle, for the Ravenhill faithful it was at very least a victory worthy to see off two of their favourite players.  Wilson deserved his man of the match award but clearly the emotion surrounding Pienaar’s farewell is what will be remembered.

Of course I have every sympathy towards Ruan, Ulster Rugby and their fans.  Where I would draw the line is at any suggestion that this is somehow favouritism of a particular province over another.  Whether or not you agree with the IRFU policy with regard to “NIQ”s”, it has been known for a while and situations like this one or Nacewa’s were always going to be messy.

Could exceptions have been made in those cases, given these are players who have a significant impact on season ticket sales?  Maybe.  But exceptions made now can lead to even messier situations down the line.  In fact, some could argue that one was already made in Pienaar’s case the last time he extended his contract.

All we can do is wish Ruan & his family all the best at Montpellier and who knows, maybe he too can make a welcome return in future.

If I was harping on Ulster week in week out, while I’d probably be focusing on Pienaar’s departure right now, overall I might be more concerned with the season as a whole as they definitely have a squad which could have earned some knockout rugby.

But when it comes to Leinster, while our season has of course gone much better, I still have concerns.  When our semifinal against the Scarlets kicks off it will have been just under four weeks since our disappointment in Lyon.  That’s a long time to have virtually nothing to play for, and it has shown in our performances, even when we won.

Much of what Leinster have achieved this season can be attributed to our coaching ticket.  Many have cited the addition of Stuart Lancaster and indeed he has put his stamp on the province, but I have done my best throughout the campaign to spread praise around the staff.

However their work is far, far from over.  Whether our players are thinking of travelling to New Zealand, USA & Japan, or just to sunnier climes for off-season rest & relaxation once the season is done, they need to put all of that behind them for the days ahead.

Maybe as an extra motivational step Leo Cullen can pin the final Pro12 table to the dressing room wall from now until Friday week?  It can remind the players what it feels like to be second place because that or worse is what we could be heading for if we don’t hit the ground running at the RDS.  JLP