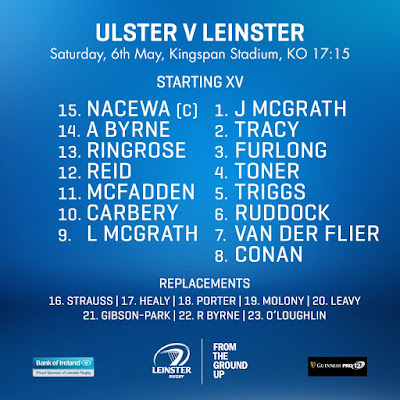 Consider this Leinster matchday squad if you will…

That was the lineup way back on August 13, 2016 as we kicked off our preseason series up at Navan RFC, also against Ulster.

Be honest - it you were asked to pick a 23 from those names you’d be confident of fielding against any team in the Champions Cup, would you have been able to do it?

OK obviously I’m betting on your answer to be “no”, so let’s assume it is ;-)

How about now?  Feel a bit differently after the numerous try-fests Leinster have had even with several “household” names unavailable?

What’s that?  Yes?  Well thank you for going along with my narrative!!!

Seriously though, what a season it has been for Leinster.  I’m being asked about the Lions with more and more frequency each passing day, but to be perfectly honest while I’ll be shouting for the boys in red when the tour and test matches are on, right now all I care about is this Pro12 title.  And when it comes to the lucky Leinster lads in Warren Gatland’s squad, I know they’ll be equally focused.

But my current apathy towards the Lions goes even a little bit further.  Right now I’m more interested in Ireland’s tour to the USA & Japan and in particular which from this new crop of Leinster talent will get their chance to shine along the way.

So while the chances of this match having actual Pro12 consequences are slim (if Ulster win by the margin they need to make the top 4 it will be seen as a conspiracy so big the US Congress will drop their investigation over Trump & Russia to look into it) there are two strong lineups on show with much to play for.

Basically this match is going to boil down to who wants it more.  The lineups are, as much as I dislike using this phrase about sport, “mouthwatering”, especially in the backs, and for me, most significantly in the centre.

Stuart McCloskey and Luke Marshall were fancied by many to have long term Ireland ambitions not too long ago yet now it seems Henshaw and Ringrose are the future. This will be a good chance for that to be put to the test - and I know Noel Reid is playing here, but he was very impressive in his cameos against Glasgow last week and he has had a good season overall so don’t rule him out from travelling this summer.

Of course another key battle with summer ramifications is at out half - Paddy Jackson surely has to have the nod for the touring ten jersey but I have a feel Joey Carbery will start at least one of the three tests and a good showing here will definitely stand to him.

In the pack, I’d struggle to think of an 8-man combination Leinster could throw together that I wouldn’t be happy with.  Given Toner and Triggs are in the second row here, it seems they could well be using this match to have a go at putting our lineout yips to bed ahead of the playoffs.

Basically my message to Leinster or Ulster fans tempted to give this one a miss would be, do so at your peril.  No matter how poor a season our northern cousins are having by their standards, they’ll won’t need any motivation to want to do us over, and they’ll have their home crowd behind them all the way.

The turf accountants are shading it to us by four points.  I think it could well be as close as that going into the final quarter but I’m thinking Leinster’s bench has a bit more to it and if Jackson & co can’t build a decent lead by the 50-60 minute mark, our chances are good and I’m going for a 7-point win by the visitors.

It also promises to be an emotional occasion for the Ulster faithful as it will be Ruan Pienaar’s final appearance before he heads to Montpellier.  I think it’s a shame that he “has to” go given his legendary status up there, and I’d be inclined to be in favour of “imports” being allowed to stay when all parties seem to want it.

Anyway...here’s to a great interpro and hopefully some good momentum for Leinster to bring into the final four.  JLP