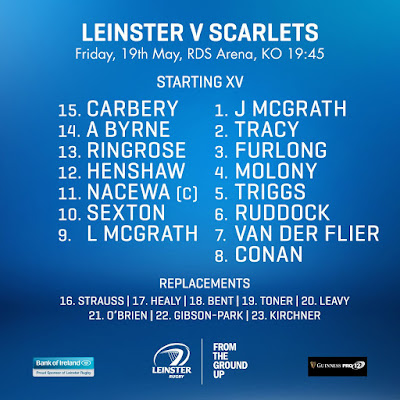 UPDATE 1:30pm Friday : Sean O'Brien ruled out with tightness in his calf so the bench reverts to a standard 5/3 split with JGP at 21, Ross Byrne coming in wearing 22 and Zane at 23.  Just ignore everything I say below about the advantages of having an extra back rower!  Dan Leavy has been playing like two men lately anyway ;-)

A few days ago Leinster Rugby released a statement regarding the floodlight failure the night we narrowly overcame the Glasgow Warriors at the RDS.

No doubt the reason they did that was to put the matter behind them with playoffs on the horizon, so my apologies for dragging it up again.  Still, there was a passage from the text that I feel is relevant to our big semifinal tonight.


As programmed to do, Generator No. 1 then also shut down to protect itself when it could not match the underperformance (of Generator No. 2)

SInce we clinched our home Pro12 semifinal with two games to spare, I get the feeling Leinster have experienced a failure in the generator which brought us to that stage of the season; then we switched to a different one for which you could not think of a more descriptive word than “underperformance”.

(Note - I am formally switching off all floodlight references at this point.)

Of course I’m not saying that our high standards have completely deserted us in that time, but the opening quarter in Lyon, the way we let Glasgow come back at us, plus the way we couldn’t rise to the challenge set by Ulster all support a simple narrative - it is essential that we put all that behind us tonight or the season could end on a massive disappointment.

While I’m on this negative vein (don’t worry I’ll snap out of it in a paragraph or two), let’s look at our opposition tonight.  One thing is for sure...our 36-point win against them back in March tells us nothing.  Even that match was very much a contest going into the latter stages and with their season on the line as well, we can’t expect anything less than the highest standard from the likes of Liam & Scott Williams, Jonathan & James Davies, John Barclay and former Leinster lock Tadhg Beirne.

But having said all of the above, I have yet to factor in the role of our coaching staff, which deserves an immense amount of credit for producing a fine string of results and performances after some upheaval right at the beginning of the campaign.

And I have to say, I like the matchday 23 they have chosen for tonight’s contest.  At the heart of it is our centre pairing of Henshaw and Ringrose - could they possible ask for a sterner test in a match like this given their respective opposite numbers?  Both of the young Irish lads are capable of making something out of nothing with the ball but once more it’s their tackling on which we’ll be relying most tonight I reckon.

Then in the pack we have taken the brave step of leaving Devin Toner on the bench - I am taking that as a sign that we could well “play safe” on our own lineout throw while possibly targeting theirs, with both Molony and Triggs well able to cause mischief.

Naturally we will rely much on our experienced players - Isa has had a few wobbles of late and no doubt Johnny Sexton will have to duck and dive around the kind of treatment from opposing back rows he has come to expect.

Where I see our biggest strength is in our bench.  Yes, the “six-two” split is a gamble, but such risk-taking is how championships are won.  If the Scarlets want to take us on in the back row, then why not use our exceptional depth in that area to its maximum advantage.  There are few teams in Europe who wouldn’t want the luxury of bringing on Dan Leavy and Sean O’Brien - I just hope we can do so on our own terms.

I let out a pretty loud “WHAT????” when I saw the points spread from the bookies, which is currently at 11 points.  But you know what, I have faith in our boys, though I’m going to be slightly more cautious and go for a 6-8 point margin.

So if you haven’t yet decided to get down to the RDS tonight, I understand there are tickets still available.  The weather looks like it might misbehave but the action on the pitch should more than make up for it...let’s give the boys in blue all the support they need and then some.  Hopefully Mike McCarthy will take a bow at some stage as well.  JLP 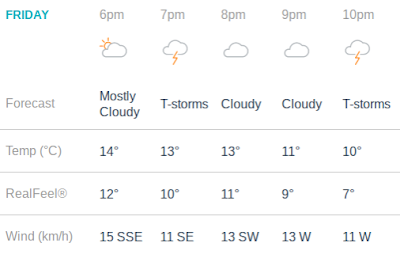