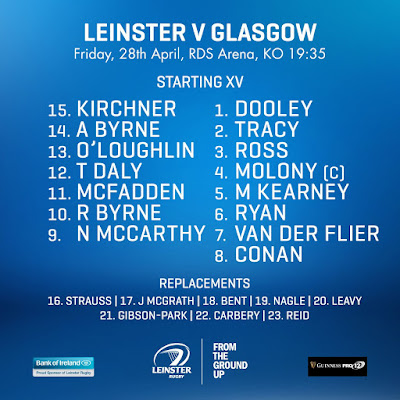 Jack Conan has a tightness in his calf so Dan Leavy starts at No 8 while Peader TImmins goes to the bench.

From the moment the Pro12 fixtures were released I’ve been harping on how important it was for Leinster to squirrel away enough points for a home semifinal because the schedule meant we had a stinker of a run-in.  Turns out we have it tucked in our back pocket with two matches to spare.

So this game tonight at the RDS doesn’t matter, right?  If you think my answer to that question is “yes” then welcome to Harpin On Rugby, this is clearly your first visit!!!

Reasons this match matters for Leinster -
So there you have it.  All that leaves me now is to make a prediction.  For once I’m going to side with the bookies who have us by six.  By the way - just two more Leinster tries will guarantee us a season average of four per game in the league - quite an achievement for pro rugby.  See you down the RDS tonight I hope.  JLP