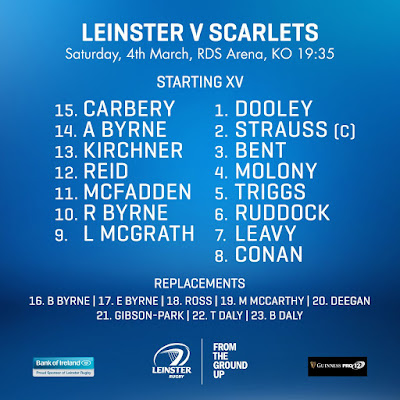 This is Leinster’s most difficult assignment in the Pro12 since our defeat at Munster on St Stephens’ Day.  And what’s more, it is against a team that won convincingly in Thomond Park only last week.

We have gotten quite used to winning down at the RDS in recent times.  The last team to beat us there in the Pro12 was the Dragons, though we stuffed them on their own patch only last week.  The last team to beat us here overall was Wasps, and we’ll see how we match up with them in a few weeks.  But I feel it’s important for us to appreciate our task on Saturday evening, just in case our home advantage makes us in any way complacent.

Last Friday I was concentrating on the Wolfpuppies and their hard-fought win over France as Munster were playing Scarlets.  Naturally I checked in on the score from Thomond, but when I saw it was 21-6 to the home side at half-time, I saw no need in keeping tabs.  BP win for Rassie Erasmus’ men as expected, nothing to see there.

Then after leaving events in Limerick unfold for about 20 minutes, I switched back over to TG4…

Not only had the Scarlets run in three converted and unanswered tries, on looking back over the match during the week, they were thoroughly deserved and if anything they were unlucky to be so far behind in the first place (suspected knock on in build up to Munster’s third try).  This West Walian outfit looks to be one that has its sights set on the final four and cannot be taken lightly.

And right up there amongst those impressing at the Scarlets these days is former Leinster prospect Tadhg Beirne, who played a big role in last Friday’s victory, carrying here, jackling to win penalties there, and dominating lineouts everywhere.  I have a feeling he wouldn’t mind proving a point or two on Saturday evening.  And they have many other threats in their unchanged lineup...outhalf Dan Jones, openside James Davies, winger DTH van der Merwe to name just three.

But enough about our guests.  I harped on them for so long in this preview because I want to be sure we’re aware of the challenge ahead.  The Six Nations may be still going, but in the Pro12 we need a playoff mentality starting now.  And while our matchday 23 isn’t quite unchanged, it is very close and we may need this on Saturday evening.

I reckon defence will win us this match.  Impressive and all as the Scarlets were around the breakdown area last Friday, we have plenty to match them, starting with Dan Leavy.  I reckon if he plays 80 minutes, we win - that’s the kind of talent he is and that’s the kind of form he’s in right now.

But of course we have a lot more than him to rely on...once we can stick to the script without the ball, the chances should come with it and with the likes of Carbery and Reid on the park there’s plenty of finishing power.

The bookies have us winning by 10 points.  Whoa!!!!  I wish I could be that optimistic!  I’m in no doubt that we CAN win by that much, but with Nigel Owens reffing (well able to ignore the family connections I'm sure!) I can see penalties hard to come by in the opening stages which could keep things close.  I do think we’ll win, but only after squeezing every ounce out of home advantage in a hard-fought tussle, by 5-7 points and I’m going to say without the BP 36 points and at some stage Nigel will give a yellow card to a ball boy 😀.

Here’s to the lads proving me wrong and putting them away easily!  A full Saturday night crowd full of voice could well help them do just that,  See you there!!!  JLP 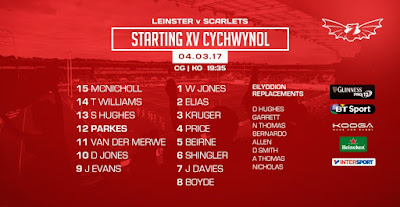