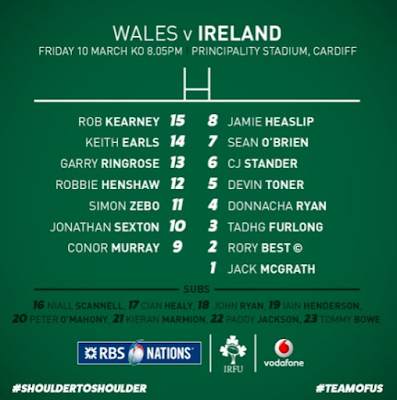 I wasn't wild about headlines like "French Connection" for our last match, I was even less wild about "The Italian Job" for the one before that, and now I'm moaning again about "Friday Night Lights" being used for tonight's encounter.  Get more original people!!!

Am I annoyed about the actual timing on a Friday?  Well, I'm about as far from a "traditionalist" rugby fan as you can get (especially when it comes to calendars), but actually in this case, I am.  It puts a real burden on those wishing to travel - the benefits are greatly stacked in favour of the TV companies and the providers of pyrotechnics.  But hey, it is what it is.

I have mixed feelings about this Ireland lineup.  Ideally I would be happier with a few tweaks, but they can't happen because of injury.

On the wing I'd be happier with Trimble over Zebo due to the latter's average form.  At outside centre I'd be happier with Payne over Ringrose because I feel Joe would be happier - not because Garry is poor, rather because Jared is more "the finished article" for what the coach is looking for in that position.  At openside I'd be happier with Josh van der Flier (or Dan Leavy if he had more caps under his belt) over Sean O'Brien because we need a hungry poacher at the breakdown against this Welsh back row.

And as for Bowe at 23?  There was a war tiff of words in the press between Shane Horgan and Joe Schmidt over this...I can see where the coach was coming from when he says Tommy has been lighting things up in training, but if this match is tight we will need nothing less than perfection from that last name on the team-sheet...perhaps not offensively like Gilroy against Italy, but defenitely without the ball (I'm more concerned about Liam Williams than I am North), so we'll see how that pans out.

But having said all of that, there's a lot to be said for naming an unchanged starting lineup. particularly in a short five-game tournament like this one.  'You did well last time lads, go out and do it again'.  I fully expect the Welsh to come out and put it up to us tonight...although the title is out of their reach, they won't want to lose again in front of their home crowd, especially against us.

Once we can keep our heads in the game and work out how to counteract what the home side tries to do, we should have enough to both get and stay ahead.  In Murray and Sexton we have a much stronger halfback pairing than our hosts - they will need the time and space to do their thing, so hopefully those around them can provide it.

I'm expecting a bit of controversy.  You know, one of those incidents that is going to have fans completely polarised.  That's hardly a tough prediction between these teams, is it?  But I have a feeling that  on this occasion we might be the beneficiaries of the outcome.

The bookies have us winning by three.  I agree it will be a tight, one score game but I think we'll win by 5-7, with the gap even wider during the second half.  Purists could well be pointing out our frailties come full time, but as far as I'm concerned, bonus points or no, this is cup rugby and the goal is to come out with more on the scoreboard.  JLP 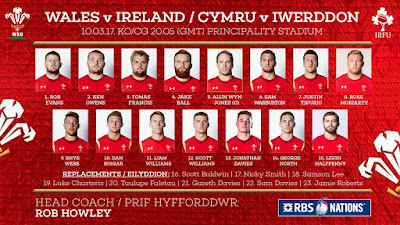