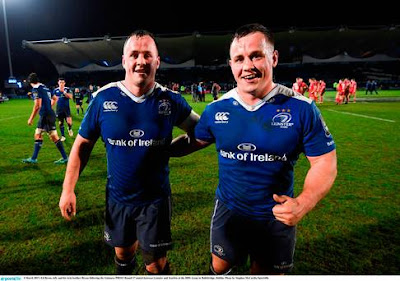 Did you see this match?  Was I crazy for posting the above tweet at half time?  I didn’t imagine that the match was evenly poised at the time, did I???

I mean...Leinster did lead the match at that point, and we had two tries in the bank to the visitors’ zero, but that in no way told the true story of the half.  The 12-9 scoreline would have been very different if Dan Jones and Tom Williams hadn’t taken their eyes off of Luke McGrath and the ball respectively at different stages.

And despite those mistakes, the match was very much a contest at that point.  Fired up by their win at Thomond a week earlier, the Scarlets clearly came in search of a lot more than a losing bonus point, and in the likes of Aaron Shingler and James Davies they had fierce competitors at the breakdown to make life very difficult for us.

Here’s the thing though...we had our own fierce competitors to match them in the likes of Rhys Ruddock, Dan Leavy and Jack Conan; the opening forty minutes was like a masterclass for anyone interested in the art of counter-rucking...nobody could bring the ball into contact with any degree of certainty.

And when Leinster had a scrum in a strong attacking position in the Scarlets 22 with the clock ticking down before the break, I felt we really needed points from this visit to act as kind of cushion...the Welsh regions’ defence was solid however and that sequence must have been a massive boost to them at the break.

But here is where we seem to be getting to the crux of Leinster’s success in recent times.  That failure to score didn’t seem to hurt us; in fact, we came out with a renewed sense of purpose and, well, you can see by the final score how it turned out.

Right...now for the bit I love after wins like this, ie going through our tries one by one...


This was an amazing display by a Leinster squad deprived of so many players.  In an ideal world, I’d love to pay tribute to them by selecting the exact same 23 for the visit of Cardiff to the RDS in a few weeks’ time, but by then we’ll have Wasps firmly in our sights.

Now Luke may have deserved man of the match, but there are several other names that stood out.  Carbery showed himself to be a very capable full back yet again, while our back row was more than up to the significant challenge put before them by the Scarlets.

Very honourable mention, however, should go to our centres Reid and Kirchner.  Both were influential in the bonus point try, only it was their defence which forced the error that led to it, and throughout the night there was no way through for the visitors.  Many raised an eyebrow at the South African’s placement in that role and he certainly did enough to send them back down again.

But much of credit should really go to the coaching.  And for once, I’m not going to focus solely on Stuart Lancaster.  It is clear he has been a powerful influence in the squad, but let’s not diminish the roles of those around him.  Remember...a lot of the youngsters showing immense ability at the highest level worked with Girvan Dempsey in the Academy.  And then we must appreciate the Leinster set pieces...10/10 scrums and 9/9 lineouts means a great night at the office for John Fogarty.

And how about Leo?  What struck me most about the display on Saturday was that we really looked like a group that was enjoying our rugby, and that’s a state of affairs that results from a culture throughout the squad that has to be fostered by the man at the top.  So basically I’m offering kudos to everyone involved at the province - after some lean years it really does look like there’s light at the end of the tunnel.

Of course I can’t let the writeup go with mentioning the latest #NigelMoment, but first a reminder of what he actually does as a ref.  I believe he provides an excellent template for rugby officials not because I agree with every decision he makes, but because he provides a clear, concise explanation of his interpretation in real time after virtually every controversial incident.

When the ball boy threw the ball against his back, only he could have come up with a reaction like that.  Can you imagine what the young lad’s face looked like as the ref turned around!  I would like to make one point about the incident...for me it doesn’t illustrate anything superior about the game of rugby as many suggest.  All sports have their good and their bad apples, and we definitely have our bad.  This was a simply memorable lighthearted incident which was well received by all at the end of a match that was fizzling into nothingness.

But one thing that certainly isn’t fizzling into nothingness is Leinster’s 2016/17 campaign which is in fine shape.  It's almost a shame we have to take a couple of weeks off when we’re playing like this, but the lads have earned their break, and besides, the boys in green deserve our full attention in the meantime.  What a great time to be able to harp on rugby! JLP