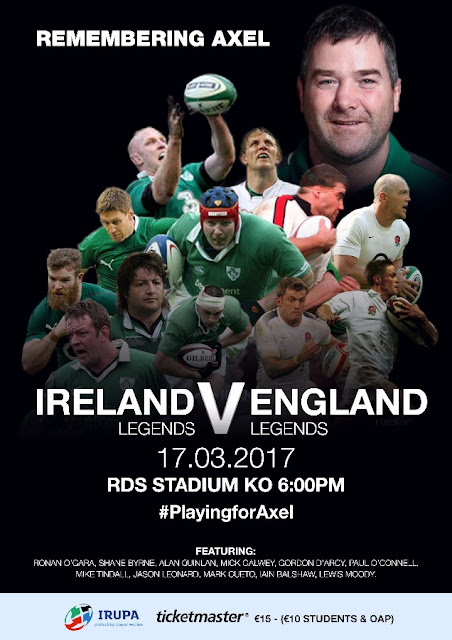 Ireland and England Legends Play In Memory of Anthony Foley

AN IRELAND LEGENDS XV will face England in memory of Anthony Foley in the annual curtain-raiser to the Six Nations clash between the two sides. The exhibition match will take place on Friday, March 17th at the RDS, on the eve of the potential Grand Slam decider between Ireland and England at the Aviva Stadium.

This St Patrick’s day will mark the ninth time the sides have met with 2017 promising to be the highest ever profile clash with over 2,300 Test caps on display and household names such as Ronan O’Gara, Gordon D’Arcy, Jerry Flannery, Paddy Wallace and Gavin Duffy to name a few lining out for the home side. The England Legends side, boasting 4 World Cup medals, will feature Mike Tindall, Mark Cueto, Ian Balshaw and Jason Leonard and many more. Both Paul O’Connell and his old rival Lawrence Dallaglio will act as waterboys on the day.

“We started this fixture back in 2008 and it has grown every year, raising over €600,000 for charity. However, this time around the fixture will take on added significance – Anthony played in this game before and I know that he would have loved another crack at the English. They have had the upper hand of late, but we have plenty of Irishmen waiting to take the fight to them for one last time in a green jersey!”

It’s not just rugby legends that will take the field as it has been confirmed that all conversions will be taken by celebrities, from all walks of life.

A post-match dinner will take place at the RDS Concert Hall at 8.00pm. This unique experience offers fans the opportunity to mix and mingle with the players while enjoying a 3 course meal with wine. A lively Q&A will follow discussing the Six Nations, the upcoming Lions Tour and the legacy of the current crop of Irish players. MC’ed by Donal Lenehan the panel will include Paul O’Connell, Mike Tindall & Shane Byrne to name but a few. A table of ten plus match tickets costs €2,000. To book your place please contact Finola Roache at finola@irupa.ie or call 087-7515670

Ticketing Information
Tickets for the legends game are priced from €10 and are available on Ticketmaster.ie