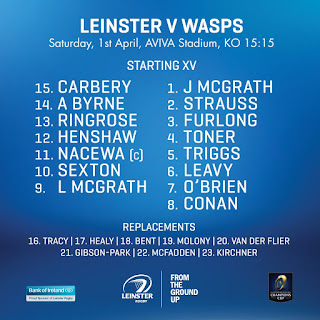 First place in the Guinness Pro 12 vs first place in the Premiership?
An Irish team v English team matchup just two weeks after a Grand Slam decider, and in the very same stadium?
Five European crowns between the two clubs?
Leinster having a massive score to settle with this particular opposition?
This is no April Fool : The Rugby Champions Cup organisers have definitely saved their best quarterfinal for first.
As well as moving from Wycombe to Coventry, Wasps’ on-pitch fortunes have certainly gone on an upwards trajectory since we last played them in a European quarterfinal.  Meanwhile, Leinster’s have headed in the opposite direction, but this season thanks to a host of promising talent being brought into the squad at just the right time, we are back to looking like a side that can challenge for this illustrious trophy.

We watched a bit of Wasps in action over the past few weeks - they didn’t look too hot against Sale, improved against Bath, and then just last weekend they needed a sending off to put away relegation-threatened Worcester.

As for our form, despite a string of massive-margin victories, we also found ourselves lucky to win our last outing, as Cardiff showed us just how important it is to stay focused no matter what the opposition.  Yet win we did.

Let me be clear.  As far as I’m concerned I would take a repeat of last week’s performance and result.  Sure, I want to see Leinster playing perfectly in all departments, but this is cup rugby and finishing on top after 80 minutes is what counts.  Having said that, they’re hardly going to set out for that kind of display so let’s have a look at the selections and see where our best chances lie.

Basically if Cardiff were able to score three tries against us when we were slow to react, there’s no limit to how many Wasps would get if we gave a repeat performance.  In the likes of Beale, Le Roux, Wade and Daly they have plenty who can turn defence into attack in the blink of an eye.

However much of Leinster’s success this season can be traced back to coaching...the addition of Stuart Lancaster to the ticket has been massive for sure, but there seems to be an all-round level of competency throughout the squad so this leads me to believe that they’re well able to pound out those few kinks we showed last weekend.

For this reason I’m glad to see the likes of Joey Carbery and Adam Byrne retained in the starting lineup.  They’ll know themselves about their “bad day at the office” last time out and that can be used to put their mindset right back where it needs to be.  They’ll also know there’s a ton of experience in McFadden & Kirchner on the bench ready to step in if the need arises.

Naturally our biggest asset will be Mr Sexton.  Will he be in for similar punishment to last time?  Probably.  But is he well able for it?  Definitely.

In our backline we will also be relying heavily on our centre partnership of Henshaw and Ringrose.  Both bring much carrying the ball but it’s defensively where their work will be needed most.

As well as van der Flier has played, I must say I’m glad to see Dan Leavy ahead of him in this selection.  Josh was unlucky to get injured when he did but Dan has been excellent since and deserves to retain the starting jersey.  Interesting to see him wearing 6 with Seanie 7 - I have a feeling they might be deploying the South African numbering method for flankers.  The main thing is that along with Jack Conan it’s a fine back row that’s well able for the likes of Haskell & Hughes.

Our scrums and lineouts have been very, very good of late.  I’d use more “very”s only I’d be afraid of jinxing them.  Nuff said on that.

The bookies have Leinster by 5.  I’m going to stay confident - I think we’ll need a bit of luck along the way but we should prevail by about 3, which would mean drama right up to the final whistle.  Should be a super day out regardless but hopefully I’ve got the result right...best of luck to Munster as well.  JLP

Dan Leavy: 'It was a baptism of fire… but it was perfect'


England, Australia and Ireland will provide two referees each


Warriors challenged the card, which was handed out for using a swinging arm in a tackle on Dave Heffernan


"It can be a long night or a very, very short night."

Note - views expressed in "Front Five" links do not necessarily reflect those of HarpinOnRugby
at March 31, 2017