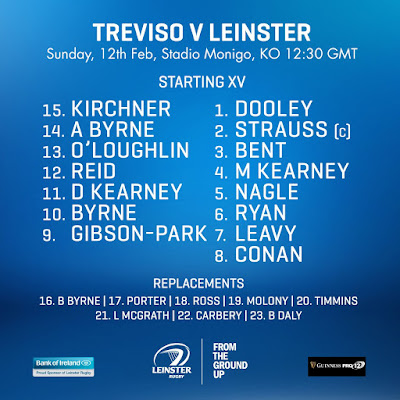 The mission for Leinster in Treviso is every bit as simple as Ireland’s in Rome...five match points is the bare minimum requirement if we want to have any hope of a top two finish otherwise there are other teams happy to take our place.

And looking at this lineup, even with so many away on Six Nations duty and injured, there’s every possibility we can get the job done.  I wouldn’t have been too confident about a centre pairing of Noel Reid and Rory O’Loughlin a year ago, but now I think they provide a solid foundation for the task ahead.

By far the biggest feature is the amount of returning players from injury...Dave Kearney starts on the wing with Mike Ross and Joey Carbery on the bench.  Also it’s good to see Dominic Ryan get what is a rare start in the senior team these days.  With every point during the Six Nations being crucial and Wasps on the horizon, we need all hands on deck.  And on that note, get well Isa!!!!

I seem to remember something about Eurosport covering Treviso and Zebre matches for the rest of the season, and I know there are different versions of the channel but I would have thought there would be a market for Pro12 rugby ahead of skiing and snooker?  Maybe I’m just being grumpy.  It’s not as though there’s no other egg-chasing to watch this weekend!  Just please don’t expect a match writeup unless some video footage presents itself!

The bookies have us winning by 15 but a bit like the seniors, I want more.  Apologies to Ian McKinley who lines out at 10 for the home side but I hope his side get a big tonking, I’m hoping at least 20 points though unlike Joe Schmidt’s men, just the bonus point win would be enough for me; thought must be given to protecting the squad with the travelling and 5-day turnaround before Edinburgh come to the RDS.