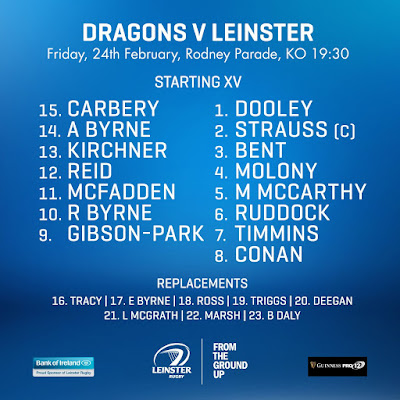 I can't lie...I'm very worried about our chances in this match.

When I wrote up our recent win over Edinburgh I stressed for the umpteenth time this season the importance of our banking as many points as we can now given our final four matches should be very difficult (three of them away).
Not only has Rodney (or "Dave" as many old-school BBC comedy fans call it) Parade been a tricky assignment for us over the years (lost by 10 points there at the end of last January) but in some ways the XV that start in Newport is every bit as "patchwork" as that which finished against Embra.

This isn't meant to be a criticism of the selection policy...we're slap bang in the middle of the Six Nations and we also shipped a few injuries at the RDS so needs must, but let's just say that it's not exactly the ideal preparation for the task of winning while scoring four tries, which I feel has to be on Leinster's mind tonight.

Of course it is great to see a couple of returnees from injury, Ferg and Rhys among them, it's just we really can't afford any "bedding in time" and with a couple of players in the backline playing in different positions, it will really test the coaching skills at the province to make them instantly productive.

First we have Zane Kirchner.  Coming into this season we had ourselves a real dilemma at 13, with Ben Te'o gone and Garry Ringrose on Joe Schmidt's radar.  We tried the South African a couple of times there in preseason and it looked as though he could well have something to offer there.

But another to catch the eye at that time of year was Rory O'Loughlin, and he has not only impressed in the senior team on the wing but also at outside centre alongside Noel Reid.  Alas, he was one of our injuries last Friday and thus Zane has gotten the nod.

This move, when combined with Dave Kearney's further misfortune, more or less forces Joey Carbery into the full back role, where he most certainly can play though I reckon the Irish coaching setup would much rather see him have game time at 10.  But with Cathal Marsh named on the bench, I can't see the youngster changing position tonight.

Sorry for being negative with my prediction tonight but although the bookies have us winning by 7, I think we might fall short by about 3 points we will score eight tries in a 54-20 win 😁.  As always, I will be delighted to be proven wrong and we definitely have enough quality to get the job done over there, it's just I'm not sure if we'll be able to get the start we need to dampen the Dragons' fire in front of their, er, "boisterous" crowd.

It's a real shame the match isn't televised...I know certain companies have agreements with the Pro12 but from what I can tell, the money is relatively small so I'm wondering if down the line the league can add a clause that if the networks choose not to cover a certain individual match, it can be tendered out to someone else?  I'm sure eir Sport would be keen to broadcast tonight's match for example.

Anyway, here's to a Leinster win tonight.  Following their progress via twitter isn't ideal but it will have to do!  JLP