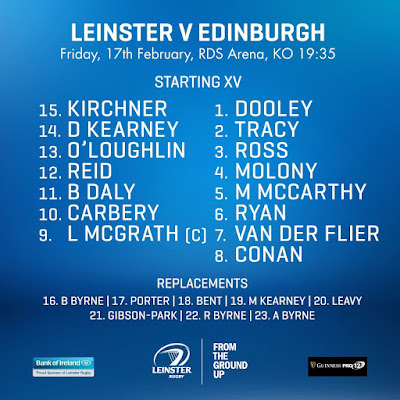 Both of the above observations make it very important that Leinster go for all five match points on offer tonight at the RDS, given what else is happening around the league this weekend.  Below us, Scarlets play Zebre, so we can assume they’ll be adding five to their own total...should they even gain one point on us they’ll feel they can catch us, especially as they have already beaten us this season.

Then there’s the clear match of the round at the Liberty Stadium where Ospreys and Munster face off tomorrow, and it’s always good to know your rivals are taking points off each other...naturally the best way to capitalize on that is with a maximum haul.

So with that in mind, let’s have a look at who is lining out for the boys in blue tonight.

Obviously the name that jumps off the team sheet is Joey Carbery.  Ross Byrne has done extremely well in his absence all things considered, but I have a feeling Leo Cullen isn’t the only head coach welcoming Joey back at out half right now.  A decent outing tonight and there may be a green 22 jersey for him next week depending on Sexton’s availability.

And though I never got to see action from our win in Treviso, I’m still happy to see the centre pairing of Reid and O’Loughlin in place tonight...more than able deputies at this time of year for Henshaw and Ringrose.

Someone else who needs a good outing to impress Joe Schmidt is Josh van der Flier.  Personally I reckon he should be starting for Ireland as he is an out and out 7.  Yes, even if that comes at the expense of Sean O’Brien.  Either way, this is a good opportunity for him to remind us of what he can do, though Dan Leavy will feel unfortunate to be on the bench.

Hopefully Mike Ross will get a good cheer when his name is read out.  He could be crucial for us in the latter stages of the season with Furlong heavily involved with the Irish setup.

Once again an interesting sub-plot at Leinster this weather is at scrumhalf.  Are you on #TeamLuke or #TeamJGP?  I’m torn at the minute.  We have seen both good and bad from both over the course of the season, though mostly good.  Right now, I’m thinking the way they line out tonight is best for us, but only if Gibson-Park is guaranteed at least 20 minutes.

Interesting to see Barry Daly start ahead of Adam Byrne?  Nothing against him but the latter has really impressed and all going well tonight, Adam could have an outing off the bench similar to that of Craig Gilroy last weekend.

All that said, write off Embra at your peril.   Greig Laidlaw is out for the remainder of the Six Nations so tonight’s starting scrum half Sam Hidalgo-Clyne will be on notice, and he has Duncan Weir outside him so they’ll be no slouches tonight.  I can see them registering a try or two at the very least.

But once we play our game and stay focused, we should be able to break them down and I’m hoping that if Adam Byrne does find his name on the scoresheet it will be after the bonus point is in the bag.

Let’s face it...the way our season stands right now, our minimum target should be a top 2 finish and a final four slot in Europe.  If that’s the case, we should make light work of Edinburgh tonight.  The bookies have us by 14, I’m saying 20.

Hopefully you can make it to the RDS tonight, remember - if you’re a season ticket holder and can’t make it, do everything you can to pass on your ticket.  Here’s to another good night for the boys in blue!  JLP