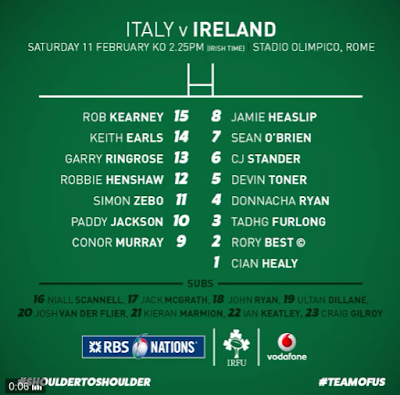 OK - enough about the bus already!!!!  Yeah, I know I’m mentioning it now, and I get the irony...but the Irish rugby media are harping on the fact that Joe Schmidt & Conor Murray were still talking about it at the press conference.  But who brought it up by asking the question in the first place?

Next I’m going to ironically mention something I hate being mentioned...the words “Italian Job” used in headlines, and this weekend it applies to both Ireland and Leinster and still it’s a worn out pun that is too tempting for sub editors to resist.  Enough already, get original folks!!!

Finally, down to business.  The task is very simple.  A victory with four tries is the bare minimum of what Ireland require if we are to mount a serious challenge for this season’s Six Nations Championship.  Because it is far from over for us.

No offence to the Scots, and stranger things have definitely happened for sure, but as of right now I can’t see them winning their remaining matches, which means if we win all of ours, we have ourselves in the frame for the title, and if that’s the case then bonus points have to be paramount.

Make no mistake, I’d be much happier about our chances if Johnny Sexton were match fit.  That’s not to say Paddy Jackson is unfit for purpose, I just feel we’d find the tries easier to come by.  However, I can’t see myself pointing to that as the principle reason should we fail.

Basically we need a full 80 minutes of the rugby we know we can play, like we showed from roughly minutes 30-70 last week.  So have we the right matchday 23 to do that?

The short answer is yes.  For one thing, I have no complaints about our back line.  Rob Kearney copped a lot of post-match flak v Scotland for one pass gone into touch towards the end but I think his form this season, especially for Ireland, is on its way back to its best.

In the key area of the centre, we have a new pairing for Ireland - sure, they have played a few times for Leinster but that doesn’t have the added “Schmidt time” and it is vital that they get to know each other’s game, especially defensively.  While I expect us to cross the Italian line a few times this weekend, they’re not short of players who can return the favour and we’ll need to be solid throughout.

When it comes to the forwards, I’m hoping the return of Donncha Ryan will help our lineout issues, and if we can keep our scrum at the levels we saw at Murrayfield there should be no problems there.  Maybe the balance in the back row would be better served with a more traditional openside like van der Flier starting, but going for CJ & SOB will hopefully give us the gainline-busting edge we need, though we’d need to do better than we did in Edinburgh!

On the bench I did raise an eyebrow when I saw Craig Gilroy’s name.  He has outstanding pace, there is no disputing that, but I never saw him as a “Joe” kind of winger, ie one more inclined to cut back inside and recycle than aim to beat his man down the touchline.  That said, maybe he’ll be exactly what we’ll be looking for to stretch out that margin in the closing stages.

The bookies are expecting us to bounce back from round 1 and record a 23-point win, which would surely have to include at least four tries.  Sounds about right to me, but I’m going to be greedy and say we need to “lay down a marker” to borrow another well-worn cliché.  I’m saying 30, and you can call that a minimum demand more than a prediction.

It’s all about settling into our game early and staying focused.  It is also about throwing a few curveballs into our game plan because I have a feeling Conor O’Shea might know a thing or two about what we generally like to do.  Maybe it doesn’t have to be quite as daring as adding a centre to a lineout, but definitely some tweaks will need to be made.

Here’s to us feeling a whole lot better around 4:30pm this Saturday than we did a week before.  JLP

PS As always, best wishes to both the Irish Women and the Under 20s, both off to good starts in this year's Championship!