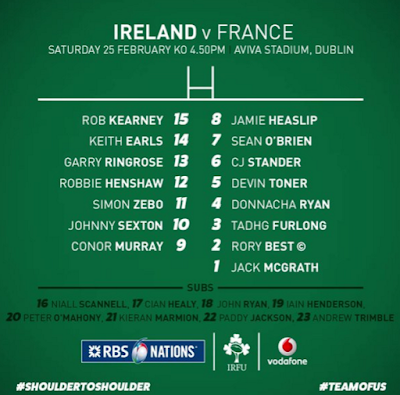 "You never know which France is going to show up" is a well worn cliché but I can't help feeling that if about which Ireland team shows up when it comes to how this one will be decided.

If we play like we did last year in Paris for example, or indeed that first half hour against Scotland, it could well be a long evening at the Aviva.  But even though Scotland let us back into it at Murrayfield and, well, Italy never really challenged us in Rome, we certainly played well enough to believe we can continue that form into this match.

But sadly that's not the only reason I'd wonder which Irish team is going to show up.

I have stated my case many times on the latest Sexton/Jackson debate; the former's experience, achievements and form this season make him a guaranteed starter, although the Ulster man has more than cemented his place in the 23 for now.  Still, the question remains, are we absolutely certain Johnny 10 is fit to start?

We all know that if it were up to Joe he'd have his team wearing full body suits which would only be removed at kickoff time to avoid tipping off the opposition.  So given that there's no real penalty for deviating from the squad you name on Thursday, why wouldn't he name Sexton whether he was guaranteed fit or not.  Let me put it this way...I'll only be fully sure he's playing if we see the number 10 on his back at about a quarter to five tomorrow.

Now to be clear, I'm not saying our chances will be slim if Jackson starts instead, far from it...I just hope that if he does start, it's more a case that everyone in the squad was in on the news so there would be minimum disruption to the build up.

Otherwise we have to be happy about the formation of our back line as there is that degree of consistency you need at this time of year.

Same goes in the forwards...good to see our skipper back again, and while I thought maybe Josh van der Flier would be in starting contention before his unfortunate injury, you can't have too many complaints about our back row.

My biggest concern on the French side is Yoann Huget.  He seems to like playing against us, and if we are to continue to stick with our narrow D patterns we had better make sure our line speed is true because there are several ways the big Toulouse winger can hurt us.

Speaking of hurt, you can be sure the French pack won't shy away from the physical side of things...we're a game plan driven team and they will try to knock us off it from the kickoff.  After we were unfortunate in both Edinburgh and Rome not to gain an extra man in the early stages, I'm hoping that was a spot of "homer reffing" and that Nigel Owens will continue the trend if necessary.

The bookies have us winning by seven...I was negative with my Leinster preview earlier but for this one I actually think we can do better.  I think we'll prevail by 10-12 pts and I wouldn't completely rule out a bonus point either...we certainly have to go for it as I dread to think what kind of score England are going to post on Sunday.

Here's to a great evening's rugby at the Aviva and best of luck to the Women and the Under 20s as well!!! JLP

PS - thanks again to Vodafone for the great hospitality on Thursday evening in town for the special screening of their documentary "Four Days In November" - it's on RTE2 right after the French match and definitely worth a watch!!!

Here at a special screening of Four Days In November courtesy of Vodafone. Like I need an excuse to relive Ireland beating the All Blacks! #TeamOfUs
A post shared by HarpinOnRugby (@harpinonrugby) on Feb 23, 2017 at 11:12am PST