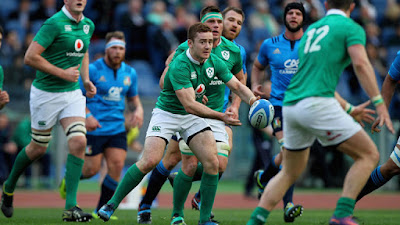 Last week I kicked off my writeup of Scotland v Ireland by trotting out a few examples of classic excuses we generally dream up when things go wrong.

For this more succesful outing in Rome I’d like to start by looking at some well-worn sporting clichés, like one we heard over and over after the final whistle : “You can only play what’s in front of you.”

I got myself in a bit of bother on Twitter on Sunday evening.  Since I started this site back in 2008 I have been waging a very lighthearted campaign to get everyone to stop referencing the same Michael Caine movie whenever Ireland’s opponents are Italy, or indeed when a province is playing Treviso, Zebre or Aironi (remember them?).

So I was casually scrolling through my timeline when I saw the phrase appear a couple of times which led me to register my ongoing dismay.  Little did I know, however, that the sources I was poking fun at were none other than the excellent Sportswomen.ie and also the “mother ship”, aka the IRFU account itself!!!! Oops!!!


That had me tucking into humble pie fairly quickly!!!  But in my defence, it’s not that I’m against the use of cliches...with so many matches to harp on, you’re bound to find yourself repeating the same phrases over and over, I do it myself regularly.  It’s just maybe we could try to weed out the more obvious ones, or at very least adapt them a bit to mix things up...for example, how about this attempt to summarize Italy v Ireland:

Ireland’s determination won the match; Italy’s mediocrity decided by how much.

When it comes to the headline, as you can see I chose to ignore puns relating to the opposition, as well as those which might point to one of our two hat-trick scorers.  Instead I want to dedicate this to Paddy Jackson, to whom at least some credit can go for pretty much every one of the 9 converted tries we put on the scoreboard on Saturday.

It is fast becoming a tradition on the site after big wins for Leinster or Ireland to go through all the tries one by one so let’s go that route again here..


There is no doubt that Conor O’Shea has his work cut out; Italy have extremely poor in their first two games, and they were both at home so we can probably watch their impending visit to Twickers from behind the sofa.  I have to assume that Parisse wasn’t 100% and there were mistakes aplenty from those around him - it was an awful day at the office and one which only adds to the argument of those like myself who are in the “Pro-Relegation” camp with regard to Six Nations reform.

But as Irish fans all we can do is look at ourselves.  The reform that has happened in this tournament means we now have two bonus points to bring forward, which puts us in a decent position despite our opening day loss.  Does that mean the road ahead will be as easy as it was on Saturday?  Of course not, and this leads to the more important question...what, if any, changes do we make to our lineup?

As I have said, I dedicate this win to Paddy Jackson, it was a fine outing.  It probably won’t surprise you, however, that I believe Johnny Sexton should return if fit.  Yes, that is rough on the Ulsterman in some ways, but for me, it is logical in others - blame my blue goggles if you must.

The debate has gone on in the ruggersphere since the full time whistle blew in Rome, and in Jackson’s favour I have seen reference made to the first test in South Africa, to Australia and to the fact that he is a form player who is currently in possession of the jersey and thus it would be hard to drop him.  All of that is true, but if you are to credit him with the wins, you cannot forget the 2nd and 3rd tests in SA, the second test v NZ and indeed the first half in Murrayfield.  Remember - I’m not saying those defeats were all his fault, but nor were all the victories fully down to him either.

And that’s not the only area where Joe’s preferred picks have had impressive replacements.  Niall Scannell was really chucked into the deep end after Rory Best’s late withdrawal and had an outstanding game.  Again, I can’t see him shifting the incumbent, but Sean Cronin might be anxious about getting back the 16 jersey.

Then there’s Jared Payne.  Were he fit right now, I’d expect Joe to put him back at outside centre.  But Garry Ringrose’s progress at both Pro12 and Champions Cup levels has been on a steep upward curve since his debuts and I can’t see his test performances being much different so “The Pain” would want to be back soon!  It wasn’t just his try that impressed against the Italians...there were slick offloads and solid defence thrown in as well.

Victorious and all as we were in Rome, I do have some concerns about our game plan.  Maybe we’re a little too reliant on earning penalties?  Against both Scotland and Italy we had the referee’s arm worn out, it was outstretched so many times for advantages, yet warnings and yellow cards were never forthcoming.

Possibly this had something to do with the “homer ref” principle.  If so, then we should see a better return against France and England.  But I’m not so sure we can rely on that being the case.  It could be that the Six Nations refs this year just don’t want to reward teams that are looking for penalties, and if THAT is the case, it would hurt us.

But we have two weeks to sort all of that out.  For now we should just enjoy what was a perfect weekend for Irish rugby.  Wins for Ireland senior men, senior women and Under-20 men.  Wins in the Pro12 for all four provinces.  Never mind the quality opposition...how often do we get to say that?

And by the time the French teams come to town, hopefully the fans from all four provinces will be able to come together and get behind the boys in green no matter who is selected.  Because this title is still very much winnable. JLP
at February 13, 2017