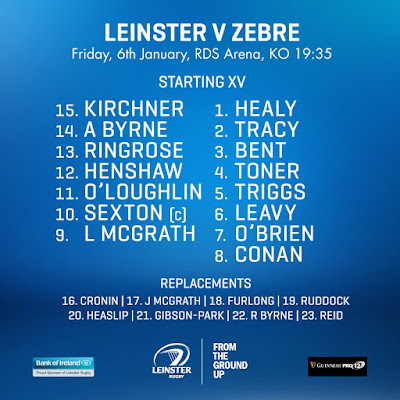 How much of a “preview” should it take for a match like this?  Leinster?  With this uber-strong lineup?  At home?  To lowly Zebre?   Anything short of a bonus point win simply won’t be acceptable.

And I’m not so sure I even need to tack on “no disrespect to Zebre” to claims like that anymore, since rumour has it this could well be their last visit to Dublin before they are disbanded in favour of (finally if so!) a Rome-based franchise.

So does that leave me with anything on which to harp?  Actually it does.

I often have a pop at the sport of rugby union for its unwillingness to change.  So you would think that I would view the raft of new laws and interpretations being introduced throughout this year as nothing but good.  Well, in this caseeven I have to admit that I have a couple of concerns.

On the bulk of the new laws aimed at speeding up the game, overall I am in favour of them, who wouldn’t be.  However I do have a teeny problem with the southern hemisphere being able to go through the bulk of a Super Rugby campaign with them in place ahead of a Lions Tour where the tourists will only be getting used to them when they touch down in New Zealand.

That’s only a minor concern, however, as the Lions do have a number of warmup matches ahead of the First Test and, well, it’s more like the English & Welsh Lions these days, isn’t it?  I’ll be cheering for the Irish lads of course, but the series isn’t exactly top of my priority list for the coming year.

No what has me most worried are the new high-tackle “zero tolerance” interpretations.  Now don’t get me wrong, I know they are aimed at improving player safety and that is always paramount, but what does it mean for Irish teams that have been drilled over the past few years to aim tackles higher than normal in the hope of effecting either a “choke” or a “strip” manoeuvre?

This was always a high-risk move anyway, as any lack of accuracy could lead to injury at worst or total seeing the attacker blow by you at best.  Now we’ll be looking at straight cards of some colour or other unless we either completely change our approach or make absolutely sure we don’t miss.

Hopefully we’ll be able to adapt to the changes quickly in such a way as both the player protection incentive actually works AND it doesn’t hurt or provincial or test performances.  I will definitely be looking at this closely over the coming weeks.

Going back to tonight, as delighted as I am to see Johnny Sexton back in action, I definitely raised an eyebrow at his being named skipper.  The guy takes on too many extra roles on the pitch as it is IMO and besides, 10s shouldn’t really be captains anyway.  For this XV I’d have given the armband to Sean O’Brien or Devin Toner.

But like I said, with this matchday 23 it shouldn’t really matter who is in charge.  Still, with Montpellier & Castres on the horizon and the Six Nations beyond that, all I want is the five match points tonight.  I know it promises to be chilly and thus those who wrap up and take their seats deserve to see the boys and blue pad the scoreboard as much as they can, but we can’t realistically expect Leo & co to hold back the cotton wool if we clinch the bonus point early.

At least if we can provide a few highlight-reel tries like we saw against Ulster, that would be something to keep us warm, and with Sexton having Henshaw, Ringrose, Adam Byrne & O’Loughlin around him in the form they’re in, that could well be possible.

The bookies see us winning by 37.  I’d expect at least that with no big matches to keep in mind, but I’m going to tone down my prediction to about 27ish, thinking Zebre might just pinch a score or two for us all to have something to moan about afterwards ;-)

Hope to see you down the RDS, and remember...if you can’t go be sure and find a decent loving home for your ticket.  JLP