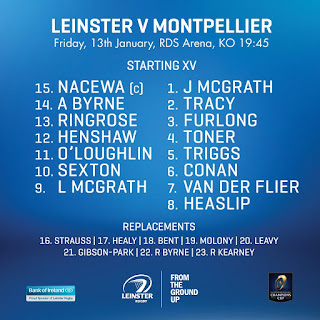 Leinster are enjoying an embarrassment of riches at many different positions but for now I’d like to harp on the second row.

Obviously the starting point in any debate over who should occupy our engine room in key European matches is “Devin Toner plus who else?” - I doubt any Leinster fan will offer resistance to that position.

So who does that leave us with...Mike McCarthy, Ross Molony, Mick Kearney, Ian Nagle and Hayden Triggs, with Rhys Ruddock able to step into the breach when required and James Ryan a talent in waiting among others.  Recent selection policy has made it appear that the coaching staff’s decision has been to go for Triggs as the presumptive starter.

Now I’m not here to dispute that, far from it.  Personally I would probably have gone for Molony or Kearney, but then that’s purely going on what I see during matches - it would seem that this is a decision which has been made not only on the player’s ability but also on their compatibility with “Big Dev” as well as key set piece situations.

And the way things went against Northampton in December, while certainly not totally down to our choice of locks, still gives us no reason to change our plans for now, so I’d like to take this opportunity to say well done to Hayden Triggs and keep on doing what you’re doing!

So let’s now have a look at how our Pool 4 is shaping up shall we.  Leinster have 16pts, Montpellier 11, Castres 9 and Northampton just 4.  When it comes to winning the pool, the maths is simple.  Win tonight, and we can’t be caught.  But...as we know after so many European campaigns over the years, it’s not all about where you finish on this particular table.

The 5 pool winners are ranked 1-5 and then the best runners-up from 6-8 and this produces the draw for the knockout phase.  The top four in this ranking are rewarded with a lucrative “home quarterfinal”.  All which means that your goal should not only be to win your pool but also to pip at least one of the other pool winners to make sure you get to play at home.

Munster lead pool 1 with 16 with a home match against an already-beaten Racing to come.  Cup holders Sarries are 4-for-4 in their pool and are very likely to make it into another perfect 6 in the coming weeks.  Meanwhile our old friends Clérmont are a point ahead of us with 17 as they lead Pool 5.  Right now our best hope is in Pool 2 where 3 clubs are tied on 13...if we can win our pool and stay ahead of them, we should be ok.

But, of course, we can’t take winning the pool for granted, there’s the small matter of tonight!

Over at the excellent Rugby Onslaught they have spotted that Jake White brings with him to Ballsbridge tonight a rather sizeable consignment of beef for the Leinster backline to break through.  Though it’s not just the weight of their physical presence that will play a factor…

Ironically after Montpellier, currently 3rd in the Top 14 just 5 points off the top, complete their Champions Cup pool schedule against Northampton next week, they go back to domestic action against Castres, who of course are also in this pool and lying 6th at home.  Which do we think is more important to them?

Naturally I’m not saying they won’t put up any resistance tonight...it will probably be a case of them seeing where things stand by half time to see if they are still in with a shout, which in turn leaves it up to us to get cracking from the kickoff and I doubt there is a better outhalf on the continent to do just that than Johnny Sexton.

And whatever our backline gives up to the opposition in size, it definitely makes up for in form.  What an amazing vote of confidence for our two starting wingers tonight Adam Byrne and Rory O’Loughlin!  With Rob Kearney on the bench we could have easily had him start with Isa and Zane on the wings.

Then there’s Henshaw and Ringrose in the centre...every second they get to play together is an investment in the long term future for both Leinster and Ireland.  Fast fleety footwork with the ball, eagle-eyed positional sense without it.

In the pack James Tracy is another that has been shown he can be relied upon, stepping in for the injured Sean Cronin even with Richardt Strauss available.  Naturally the lineouts are still an issue, but hopefully we have put in enough work to fix them because if they continue too far into 2017 then it could be very costly.  Plus, as many have pointed out, lineout woes aren’t always entirely the fault of the hooker.

So the bookies have us winning by 10 points.  I’m going a bit more conservative, saying our margin will by 6 to 8, with my assumption being that our visitors will “give a damn” well into the second half.  As for the bonus point?  My gut is telling me that we’ll fall just short.  But it also told me back at the beginning of November that the US would choose a different president!

Hopefully there will a full house braving the cold in D4 tonight...see you there!  JLP