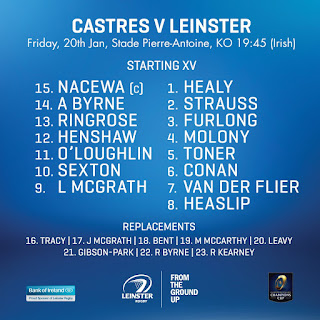 This weekend, being the final round of pool matches, each pool has both its games being played simultaneously at five different time slots across the weekend.  Leinster’s Pool 4 is first up tonight, while three more get decided tomorrow and finally Ulster’s Pool 5 gets wrapped up on Sunday afternoon when we will know the make up of the quarterfinals.

All of the above means the dreaded “Sunday lunchtime” slot is left for the Challenge Cup,  which leads me to wonder...why can’t we do it that way for ALL the rounds?  Play both matches from the same pool simultaneously throughout the pool phase and ensure none of the Champions Cup teams are left with that dreaded Sunday time?  Yeah, I know, it’s down to the TV companies.  Oh, well.

Now...to tonight’s fixture.  As always with French clubs, we must ask ourselves how motivated Castres will be.  Mathematically they still have a VERY outside shot of reaching the last eight, but to do that they will not only have to put four plus tries on our defence, but also resort to prayer so that results go their way for the rest of the weekend.

And while they would of course like to avoid embarrassment in front of their home crowd, I still can’t help feeling they will have more than one eye on next weekend’s Top14 fixture, ironically with Montpellier who are also in this pool.  Castres currently lie 6th in the league, right on the edge of the playoff spots, and have a host of clubs breathing down their neck behind them.

Hayden Triggs copped a three-week ban though in reality it only excludes him from this match.  Instead we have a “starting pair plus sub” trio which is how I would have selected it before the Champions Cup campaign began (note - I freely admit Triggs was the right choice in the end).  It’s a great opportunity for young Ross Molony to get more game time and you can always count on a good shift from Mike McCarthy late on.

Another couple of changes come in the front row, with Cian Healy and Richardt Strauss getting the start ahead of Jack McGrath and James Tracy….again, I can’t see that costing us too much quality-wise.

But it was the back line play that caught the wider European attention last week and we send out an unchanged lineup from 9 to 15 at the Stade Pierre Antoine.  Obviously a few individual battles with work out differently to the Montpellier mauling but I really can’t see how much more advice the lads will need besides “same again, lads!”  Something tells me Robbie Henshaw could be a name we’re all talking about after this one, in a good way of course.

The bookies have us winning by 13 points, a massive amount for an away side in France whatever the circumstances.  Well for once I’m going to be optimistic and say we’ll beat that.  Obviously I can’t predict a margin like last week, but I can see us pinching another late score or two to make it something like 16-18 by the end.  And yes, I think we’ll get the bonus point.

Look...it’s very important that the boys in blue win big again tonight.  Sure, we want the home quarterfinal.  And yes, a “top two” seeding could help us get a home semifinal as well should thing work out.  But in actual fact the stakes are even higher tonight.

Most importantly….arguably Leinster’s biggest US-born fan (IS that arguably? Let me know if I have any challengers) will badly need cheering up after about 5pm tonight Irish time.  So you see Leo, Isa & co, you really have no choice but to go on another try-scoring spree.  My humour for the rest of the weekend depends on it!  JLP

They might be out of contention for the quarterfinals but Leinster A’s British & Irish Cup matches are always well worth a watch and what’s more they are free for season ticket holders so why not head down to Donnybrook Stadium to catch the boys in action.