On the new high tackle interpretations 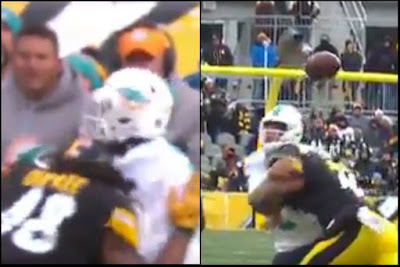 Sunday evening I happened to have an hour to myself to flick around the channels, so I settled on Clérmont v Toulon...but when I saw that was at half time, I switched over to the AFC Wild Card game between the Miami Dolphins and the Pittsburgh Steelers for a short while.  I am fan of the NFL but with the rugby blogging & what-not I rarely get time to watch.

Pittsburgh were well ahead - Miami had the football and were trying to claw something back before halftime.  Their quarterback Matt Moore was nearly sacked on a key play but managed to scramble and was about to throw a pass when….boom.  Or should I say BOOM!

Right after he released the ball he got, er, “tackled” by Steelers linebacker Bud Dupree.  The reason I use quotes for that word is that in reality, Dupree charged into Moore’s jaw with his helmet.

Strangely enough however, the media attention seemed to focus on first, the humorous reactions on Twitter and second, the fact that Moore returned to the field after just one play being substituted.

Obviously the second point is important, as it is very similar to the George North incident we had in rugby not too long ago.  But the fact that it seems to be an afterthought in much of the coverage is only surpassed by the absence of a third question that needs to be asked...why the hell wasn’t anything done about Dupree???

The result of the play was a 15-yard penalty for “roughing the passer”, one that was pretty much negated by a 15-yard penalty for “unsportsmanlike conduct” by one of Moore’s Dolphin team-mates who got involved in the “shamozzle” that followed the hit!!!  Dupree was there ready to stop the Miami offence again for the very next play.

If the NFL really are taking the issue of concussion seriously after all the revelations and proven research from years gone by, there should have been rules in place to make sure Dupree was not allowed to return to the field for a considerable length of time after that challenge.  Not because he necessarily meant to do any harm, rather to do something to make others think twice before attempting this in future, especially at junior levels where the levels of both training and physical fitness are far lower.

This incident happened to take place on the very same weekend when European rugby was getting its first taste of the new “zero tolerance” interpretations of the high tackle.  And not surprisingly, it had an immediate impact (pun not intended for once!).

I was of course at the RDS for Leinster’s match against Zebre.  The game was just a couple of minutes old when Garry Ringrose stormed into the visitors’ 22 where he was met by what certainly seemed to be a tackle that fell into the category in question (didn’t quite catch who did it).  But Garry wasn’t injured by the collision and play actually continued, leading to what turned out to be the first of ten tries on the night.  So with all the excitement of the home crowd, the tackle was forgotten.

As the tries kept raining in, my gaze could not help but be diverted to my tablet beside me in the press box, on which I was streaming Ulster’s match against the Scarlets.  This was another time I just happened to be paying attention when there were controversial head-related incidents.  Two yellow cards were issued within the space of a couple of minutes, first to Sean Reidy and then to Jake Ball, both clearly under the new restrictions.

Now let me be clear.  I’m not here to harp on individual incidents and whether or not they should be called.  I’m here instead to examine the overall goal of these interpretations, and indeed head-related protocols in general.

Over the years throughout the professional era, “first contact” tackles have crept upwards from the hip...of that there can be no doubt.  The “classic” rugby tackle is meant to stop the man but as time has progressed, tacklers at the top level have become increasingly motivated to effect a turnover themselves, and Irish teams have been to the fore in this area it has to be said.

The premise behind approaching tackles this way would appear to be a measured evaluation of the whole “risk v reward” idea...the reward, of course, being a forced turnover at best or thwarting the advance of the opposition at worst.  However the risk involved in such a tackle not paying off is where the controversy arises, and it offers a far more serious best/worst scenario.

When you aim to stop a player approaching you by going for the area where he is carrying the ball and you miss, the “best” that can happen is that he gets past you.  Obviously this is bad for your team-mates and could actually create an opportunity for a score.  But it’s definitely not the worst thing that can result from the miss.

Not only do you run the risk of hitting the player dangerously around the neck area, but also since you yourself remain upright in the challenge, there’s every possibility he can collide with your head...just ask Messrs Sexton & Bastareaud.

And remember...these laws are being put in place not merely to prevent mistakes at the top level.  Professional rugby is what appears on our telly screens so this means what happens there is what players at all levels below try to emulate, especially schools.  So overall, I see absolutely no problem in lawmakers taking steps to remove from the game the possibility of these tackles going wrong.  It’s actually common sense.

But the question we need to ask is...are the actions being taken actually going to reduce the amount of dangerous challenges?

My main problem with this new “zero tolerance” decree isn’t so much about the unfairness or inconsistency of the individual calls themselves (though of course they don't help), rather the fact that professional players all over Europe who have been in full training since last July have to completely adjust to the new protocols in mid-season.

To make the proper changes in a high contact sport, we can’t simply make knee jerk adjustments based on individual things that happen on the field.  We need to get the right consultants involved, including those whose fealty is more to the science than the sport, and make sure referees, coaches, players, media and fans alike are all on board from the start of a new campaign.

Instead this new policy has been dropped into a season where it will invariably become (as if it already hasn’t…) a stick with which to beat the game’s organisers week in week out as it appears to affect some teams more than others, when it should be one that shows a unified front trying to make this great game safer for all,.   JLP
at January 10, 2017