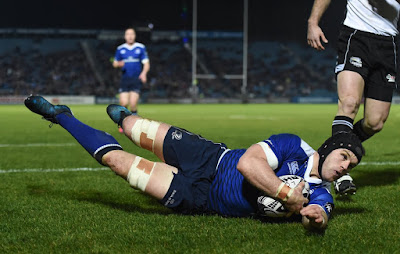 Of course Leinster should be easily beating a poor outfit like Zebre, especially when we send out a starting lineup that includes a quality central axis like Sexton-Henshaw-Ringrose.

But does that guarantee we’ll post a big victory and that everything will fall into place for us?  Of course not.  So we should enjoy the impressive results when they happen.

Last week I quite enjoyed using a “list format” for the match writeup against Ulster and with ten tries to savour in this one, I see no better way to account for them than by going down a similar road.


5 tries, 5 Sexton conversions including this one right at the end, I'll take that for a first half! #COYBIB
A video posted by HarpinOnRugby (@harpinonrugby) on Jan 6, 2017 at 12:29pm PST


With Ulster’s game in hand being at home against this same Zebre outfit, the Pro12 table looks as though it has developed into a six-way race for the top 4 places.  And with “points difference” the next tie breaker after “match points” and “match wins”, it has to be said that every bit of Friday night’s winning margin is important for our quest for a top two finish and the home semifinal that goes with it.

There’s no doubt that the return of Sexton to the lineup played a part in our ability to break through so often...he seems to have lost none of his guile and sound decision-making...but still I have to say it has been awhile since I have seen the boys in blue show such a deep rooted culture of close handling right throughout the fifteen on the park at any given time.

It was certainly a joy to watch on Friday and if we can keep it going through to May there could well be good times ahead for us.  JLP
at January 09, 2017