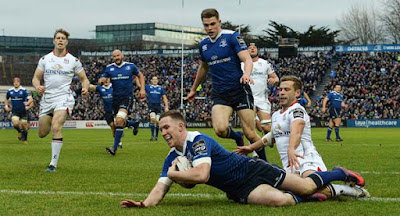 Normally we try to use our headline as a theme to describe the match as best as we can throughout the piece, but for this, the first writeup of 2017 covering the final Leinster match of 2016, we’re going to take that a step further.

15 THINGS LEFT BEHIND AND WHO LEFT THEM

1 - Many of Ulster’s key players, by the IRFU

I’m not sure why this is such a big talking point right now - it has been a common practice for many years now, definitely since we began harpin’ on rugby back in 2008.  But it’s true, while Ulster had a very strong 11-15 on the park, they could have done with the likes of Rory Best, Iain Henderson and Paddy Jackson in their lineup for a match on a ground where their fans are particularly sick of losing.

Two very uncharacteristic early strikes by Ulster’s talisman - nothing to do with the number on his back either he was well able to score both times.  Those six points would have definitely helped their confidence.  Both were from around the same area and went either side of the posts.

“The Leinster lineout this season has been absolutely world class.”

It’s been what now?  Which world was he talking about - maybe he meant the darts that have been sailing over everyone’s heads were meant for gravity on Mars?  The set piece has clearly been our biggest liability this season, though ironically after he said the above, we did pretty well, being credited with 10 for 10, albeit with at least one of the ensuing mauls being botched.

And off one such successful lineout, a cutting line from Rory O’Loughlin off his wing set him on a course to beat several Ulster defenders, keeping the ball under the correct arm as well to score from halfway.  As an 80-minute spectacle this match was far, far from a classic but you wouldn’t be saying that if you only watched the tries as all four were impressive in their own way, with this one being the best in my opinion.

OK maybe a bit of a harsh subheading but remember we’ve a theme to follow.  And it has to be said that if McCloskey wants to catch Joe Schmidt’s eye, the strong gainline busting runs won’t be near enough.  His positioning went a long way towards creating the space for O’Loughlin to run through, although to be fair he didn’t have a regular inhabitant of the 10 channel inside him.

Not Ulster’s day in general, but it certainly wasn’t Tommy’s.  Right after an Isa penalty made it 10-0 the restart was misjudged by Sean O’Brien and his jumpers and fell perfectly for Tommy, or so everyone including himself thought.  Again, I want to be fair to him.  He was accused by the commentary of thinking about his celebration...I actually reckon he was being too much of a perfectionist in trying to tuck it under his left arm to fend off last ditch would-be tacklers.  He later got a fizzed pass in the noggin from Pienaar for his trouble as well.

Just in case you think I only have the knives out for Ulster players, I certainly can’t ignore the excellent chance missed by Sean O’Brien when we basically had a three on one in the widest channel yet he ignored the support either side of him and ran straight at Charles Piutau.  It was butchered, and he’ll no doubt get a slagging at the DVD session.  Enough said.

At some point during every match by the Irish test team or any province I spare a thought for the poor lineout trick play...generally we never use them.  With the maul set up such a key component of the game these days, I reckon we should try something deft at least once per match to keep the opposition honest, like throwing to the first man who gives it back to his hooker to steal a march up the tramlines.  On this occasion, Cronin went to Jack McGrath who tossed it inside to his namesake Luke who strolled through the gap for a cheeky try number two.

9 - Whatever Les Kiss said at halftime, by Ulster’s defence

17-0 to Leinster at the break, and it should have been more.  Whatever about their history on this ground, the Ulster coaching staff could not have been too happy.  Yet when spectators were still making it back to their seats after getting halftime refreshments, a deft little dink through by Ross Byrne sat up nicely for Rory O’Loughlin to take and score.  Not the first time those two have combined in recent weeks, but the visitors’ coverage was all over the place.

10 - Strict interpretation of many of the game’s Laws, by John Lacey

I’m not necessarily knocking the ref here, it’s just he seemed to let a lot go from both sides while making harsh calls at other times.  The only infringement he was paying particular attention to was side entry.  He kind of had no choice but to bin Jack McGrath for slowing down the ball when off his feet close to his own line as the Ulstermen were finally beginning to see some regular possession when 0-22 down.

11 - My ability to see the best moments of the match, by Ulster & Leinster 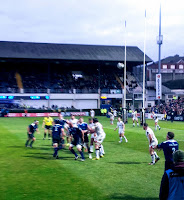 See this pic?  It’s not a particularly good one but the reason I’m sharing it is that it represents the only action that took place right in front of us the whole afternoon.  Over 70% of the territory in each half favouring different sides meant the majority of the action was down at the North Stand End so we had to watch a lot of it on the screen.  Even the one try we did have at our end was over in the far corner.  I'm not exactly grumbling about it, as them's the breaks, just pointing it out.

12 - All interest in what was going on, by much of the crowd

Watching people leave before full time is a constant bugbear of mine, and it seemed to happen even earlier here.  It really was a particularly dull second half unless you happen to be a defence coach as for the bulk of it there was no way through the tackling cordon for either side.  Ulster did manage to find a gap on 77 minutes as a well disguised pass from Pienaar found Piutau on a good line and went over to get their side’s duck-egg off the board.

13 - The defeat in Thomond Park, by Leinster

Even though it was a much stronger side than we put out in Limerick on St Stephens Day, the win still had to be achieved and with three well worked tries we got it done.  And that is certainly not nothing, however...

...there can be no doubt that both sides left at least one try out there on Saturday, and in our case, we might well be needing that extra point in the latter stages of the regular season.  Since the day the fixtures were first announced I have been harping on our final four matches :  Ospreys (a) Connacht (a) Glasgow (h) Ulster (a).  Can’t see too many easily-earned points there so we can use every one we can get now.

But before we get too obsessed with what might have been, let’s remember that it’s a time of year for taking stock and looking ahead.  2016 finished a heck of alot better for both Leinster & Ireland rugby than it started.   Rory O’Loughlin finished this game as man of the match - how many Leinster fans knew his name 12 months ago?

When you add to that Adam Byrne, Dan Leavy, James Tracy, Joey Carbery, etc, etc...then the continued improvement of Garry Ringrose (outstanding defensive display alongside Noel Reid in this one) and Josh van der Flier...THEN the more recognised names like Fergus McFadden and Dave Kearney who must be wondering how they’ll get back into the side, you have to feel good overall about what 2017 has in store once we can build on this momentum.

And on that positive note, I reckon I should leave this writeup behind.  Happy New Year everyone.  JLP
at January 02, 2017