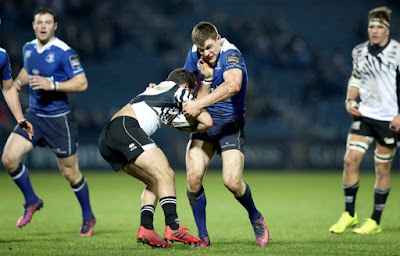 Hard to believe we’re already at the halfway stage of the season, isn’t it?

Well with an “off week” to provide a break between the end of the Champions Cup pool stage and the start of the Six Nations, we took a few days off here at Harpin Manor and we will be back to “normal” posting Tuesday.

In the meantime here is a summary of how Leinster’s season has gone so far, featuring quotes and links from our match writeups...

...what I’ll be looking for more than anything else in this campaign as compared to last is a better sense of organisation with the ball.  No good keeping the other side of the scoreboard low if you can’t get yours higher.  And for the full 80 minutes I have to say the “pill” was well marshalled around the field by both Ross Byrne and Joey Carbery.

It seems that we have finally discovered the art of successive offloading at the point of contact...one brings it in and lays it off in the tackle to a receiver who it turn has someone in support.

Garry Ringrose was on the wing - I wondered in my preview if perhaps this is with a view to his getting an Ireland cap in November.  Whatever the reason, he did ok but personally I don’t like him there.  Even without our having lost so many centres I’d still say that is where he belongs and every minute spent on the park elsewhere is one wasted where he could have gained more top level experience.

You win a penalty in midfield, you put it into touch, and you run a set play to get the final few yards to the line.  All of that has the “win your own lineout ball” component baked right into it.  It’s an afterthought - an assumption at this level.  Yet over and over we have struggled with it in recent times.  And it doesn’t seem to matter who the hooker is, nor where in the lineout the dart is going.

...when we packed down for a scrum on our own put-in not far from halfway around the 50th minute mark, we had a deserved 10-point lead in a match we were “supposed to” lose by a similar margin.   It was a lead that was ours to throw away, and unfortunately, we did just that.

Before the season kicked off I was hoping for 10 points from these opening three matches...we got 9 which isn’t so bad.  Also, compared to the corresponding fixtures from last year, we’re up by a net of two points, so also a positive.

...after exploring an exciting new offloading style in recent weeks under the stewardship of the promising Joey Carbery, the return of Johnny Sexton there seemed to come with a return of one out runners and cheeky little territory kicks from the 12 and 13 channels.

Noel Reid...had a solid attacking outing with new centre partner Rory O’Loughlin including a combination that lead to the try, but also between them they made over 20 tackles which included Reid slowing down a rampaging Nick Williams more than once, most importantly right at the end.

...while Sexton won man of the match I was impressed as well by our starting centres (Henshaw & RIngrose) but personally I was ready to give the gong to Luke McGrath...not the first time this season I went into a match with doubts over a player only to have them dispelled by a quality display.

...it’s important that we pay our respects and move on as best as we can.  Let’s just say I’m not really in a mood to be all that analytical this week, but it just so happens this wasn’t really a match fit for too much analysis anyway.  Simply put, Leinster were up for it, Castres weren’t.

What made our late reward a deserved one was an overall sense of belief throughout the team, plus an extra pair of fresh legs in the pack thanks to the prior planning, and last but certainly not least individual displays from the likes of Garry Ringrose, Dan Leavy, Sean Cronin and ultimately Jamison Gibson-Park…

...watching back over it a second time, there was something about the way our approach evolved throughout the 80 minutes - almost an organic process whereby we were adapting to what they were trying on us and slowly but surely we were able to squeeze the life out of their attack, while at the same time making the most of our visits to their end of the park.

Adam Byrne deservedly received man of the match but academy player Ross Byrne caught the eye with an impressive outing at 10 for the full 80 minutes. A mention also for the irreplaceable Isa who kept talking and communicating throughout to the younger players in front of him…

They would not go home empty handed however, Andrew Porter was awarded a try.  The grounding was unclear, but the ref asked the TMO if there was any reason he couldn’t award it, clearly there was not....picking up that point where other teams wont will mean a lot at the end of the season.  Nothing really to be too cynical about.

They clearly had a remit - secure the win as clinically as possible and don’t leave the bonus point behind should the Dragons leave it there for us.  And while it wasn’t exactly pretty, the plan did come together.  And if we are going to find fault with the things that went wrong, we must also applaud what worked and by that I don’t just mean the four tries we scored - the style rugby we were playing to bring them about must also be taken into account.

Go back in time to preseason and tell Leinster fans Ross Byrne will send an inch perfect crossfield kick to Rory O’Loughlin who using perfect technique will catch and score on an English ground, they’d assume it was somewhere like Nottingham or Cornish Pirates in the British & Irish Cup.  Yet here they were working some magic and putting a try bonus point very much on the table.

Garry Ringrose kicks a grubber deep into their 22 and with Joe Schmidt looking on, he and Adam Byrne apply jut the right amount of pressure on the chase and we turn it over.  Fourteen gruelling yet powerful phases from the pack later, Tadhg Furlong planted the ball down for try number five.  O’Brien, van der Flier and Cronin all deserve honourable mentions for the build up.

Time and time again JGP was attempting (box kixks) but from his body language it looked as though it was going against everything he had been taught on his way to the professional ranks and they were going way too far handing easy opportunities to Munster.  If he can fix this aspect of his game soon he’ll be doing very well.

Rory O’Loughlin finished this game as man of the match - how many Leinster fans knew his name 12 months ago?  When you add to that Adam Byrne, Dan Leavy, James Tracy, Joey Carbery, etc, etc...then the continued improvement of Garry Ringrose (outstanding defensive display alongside Noel Reid in this one) and Josh van der Flier...THEN the more recognised names like Fergus McFadden and Dave Kearney who must be wondering how they’ll get back into the side, you have to feel good overall about what 2017 has in store once we can build on this momentum.

There’s no doubt that the return of Sexton to the lineup played a part in our ability to break through so often...he seems to have lost none of his guile and sound decision-making...but still I have to say it has been awhile since I have seen the boys in blue show such a deep rooted culture of close handling right throughout the fifteen on the park at any given time.

An evening like this at the RDS needs to be savoured.  And having been critical of the overall Leinster support in the past, it has to be said that it was absolutely superb this time.  Loud cheering and singing from start to finish and once the fourth try was secure there was even some ironic cheering for things that went right for us and wrong for our opponents before the night was out.

Basically that was our biggest failing on the night...individual errors at costly moments.  Making a move a fraction too early.  Grabbing for the ball a fraction too late.  Naturally losing both Sexton and Nacewa so early didn’t help either, but pretty much all of Castres’ points can be put down to simple technical “no-nos” on our side of things 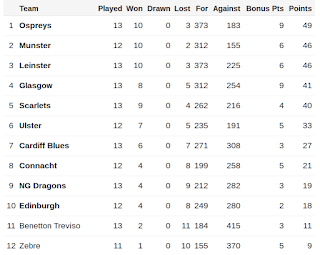 When it comes to our challenge for the Pro12 title, as you can see there are several teams in contention so we will need all the points we can get to crack that top four between now and the end of the season, and as I have been saying since the fixtures were released, it is important to be mindful of our final four matches, which could well be the most difficult run of successive matches we have ever faced in this competition.

As for the Champions Cup, well as always we need to see how our squad looks come the end of the Six Nations, but with a full squad we have the ability to beat anyone, especially at home.  Having a couple of home games leading into the visit of Wasps has to be a help as well.

Loads of hard work ahead, but loads to feel good about! Bring it on!!!! JLP

PS - tomorrow we’ll take a similar approach to Ireland’s matches in 2016 ahesad of the Six Nations.