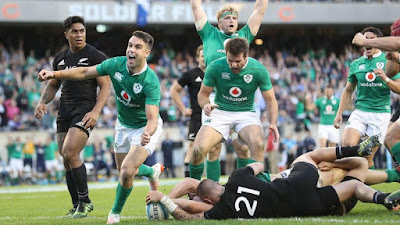 In American TV there is a thing known as a "cold open".  It's when you see a bit of a TV show before the theme tune & opening credits are played.  For example, the "Saturday Night Live" sketches featuring Alec Baldwin as Donald Trump are mostly cold opens.

Every year, the most important tournament on the European rugby calendar begins with a cold open, or at least a lukewarm one.  Between the November internationals and the beginning of the Six Nations, the players' clubs are each mostly involved in four key pool matches in the Rugby Champions Cup as well as domestic fixtures just after Christmas.

So unlike the World Cup there are no warmup matches for coaches to test some combinations or see how fringe players are looking.  It's straight into the deep end with the Grand Slam on the line from the moment their team takes the field.

With this in mind, we're beginning our build up to the 2017 Six Nations by taking a look back at Ireland's performances over the past year, seeing as how this is the only form guide we have.  We are using a similar format to the one from yesterday's look at Leinster's season so far, featuring quotes & links from our match writeups.

Remember...the last game before this series begins was that RWC2015 quarterfinal I keep trying to forget despite repeatedly bringing it up in posts.

So to summarize...win the first half?  Check.  Justify the unusual centre pairing?  Check.  Change things enough to bring the win home?  No.   End result - Doom and gloom predictions? Proven wrong.  But also...Grand Slam? Gone.  Triple Crown?  Gone. How about third title in a row?

...my problem with the overall strategy is that it seems to rely on both Henshaw and Payne playing 80 minutes in every match?  Even when there’s a 6-day turnaround?  When both are just returning from injury?  Surely if Joe has the ability to “mould” the two fullbacks into a dynamic centre duo performing specific tasks, he can do the same with others to take their place when needed?

Just one try and ten points was all we had to show for (our) dominance.  It wasn’t entirely our fault and I’ll get to that, but there is simply no point starting a move, especially at this level, if you’re not able to finish and between dropped balls, misfired passes and that old bugbear - poor lineout technique at key moments, we certainly didn’t help our own cause.

...what about Jamie Heaslip?  In a determined run that was reminiscent of All Black Kieran Read’s line that denied Rob Kearney going under the posts at the same end of the ground in 2013, he was there to receive the ball from McFadden with the line a tantalising 12m or so away....the Irish vice captain hadn’t come all this way to be denied at the end and there was quite simply no stopping him getting that ball down as the clock was just about to hit 40.

Now that Ireland’s methodical approach under Joe Schmidt has garnered not one but two Six Nations titles in a row, there has been little doubt that the other teams have worked out to knock us off our game in the early stages of matches, which is why we have seen a host of incidents varying in seriousness from prolonged holding at ruck time to full on cheap shots on Johnny Sexton long after he got the ball away.

Remember...at this stage we were TWO MEN DOWN.  You could have forgiven us for being keen to kill time under those circumstances, yet instead we were keen to get the ball as deep as we possibly could in their territory.  Ye gods, that shows some faith in our defence doesn’t it.  With Payne putting a long grubber through here and Conor Murray taking a quick tap free kick there we did indeed put the pressure right back on to our hosts who mustn’t have known what was hitting them.

Say what you like about the negative aspects of this approach (the Boks’ coach certainly did during the week) but when you’ve already won a test match on foreign soil and you have your hosts fired up to come after you, it really makes a lot of sense to send them back towards their own try line as much as possible, and if it’s working then why stop doing it.

When the final whistle blew I saw a lot of comment online suggesting Joe Schmidt didn’t use his bench properly.  This complaint annoyed me greatly.  Not that it wasn’t necessarily justified, but for that to be the first source of grievance after this display, indeed this series, was mind-boggling.

Zebo knew he could put boot to ball because under Joe Schmidt’s guidance, he could be sure there would be a host of green jerseys there to exert pressure, and he was right.  Eventually the ball came to Julian Savea, who could be forgiven for thinking he could nip back over his own tryline before running the ball out on the way to clearing the danger.  Eh, yeah, about that….BOOM!  Meet man of the match Conor Murray.

...if you want to throw a bubble around a particular contest and analyse it based on the “ideal” way you feel the game should be played, by all means go ahead, but you are setting yourself up to be wide of the mark most of the time, I’m afraid - and Saturday evening’s match at the Aviva Stadium was a classic example of one that needs the full complement of context before we can harp on it.

Chicago might be known as the Windy City but right from the very kickoff the All Blacks came at us like they brought the gusty weather to Dublin with them and had it at their backs.  Beauden Barrett found Sean O’Brien with his drop kick and we were unable to deal with the onrushing pressure...suddenly the World Champions had front foot ball and the game not a minute old.

So to summarize, we completed a rare treble of wins over the “Tri-Nations” in 2016, Rory Best celebrated an illustrious ton of caps with another display that clearly puts him in Lions-leading contention, and we showed we can pull through a testing encounter even with a host of “second-string” players.  How else can I finish this post but like this - for now until what promises to be another exciting Six Nations...that’ll do!!!