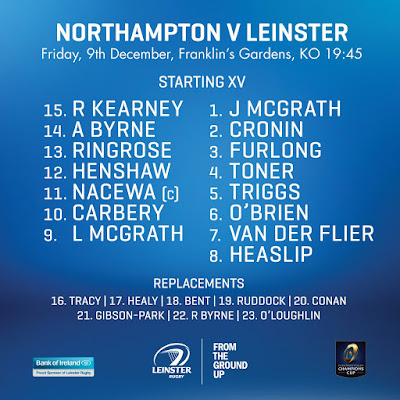 It should be no surprise to see both Pat Lam and Northampton in the news this week...after all, Leinster are heading into a double header with the Saints and Lam was their skipper when they lifted the then-Heineken Cup back in 2000.  But that’s not quite why they are making headlines now, is it?

Of course it’s a shame to see Lam leaving Connacht he has taken them to heights very few fans would have dreamed of.  But can we blame him fpr passing on an opportunity like this to possibly make Bristol into the new Toulon?  I certainly can’t.  The only thing I don’t like about the news is the way it gets announced mid season right before Connacht’s most important matches of the campaign so far - it happens all too often in rugby.

As for Northampton, they must prepare amid much controversy over the SNAFU that was their handling of the George North situation.  What a PR disaster all round.  They eventually arrived at the correct result - his non-involvement in any action for the immediate future, though if you think I’m saying that purely as a Leinster fan who doesn’t want my team facing him, then it says a lot more about you than it does me.

But anyway...to the match at hand.  This is of course also Leinster’s biggest contest of the season so far.  We got much done in rounds one and two and it’s time to consolidate.  In an ideal world we’d have the home fixture first in this series but you have to play the hand that you’re dealt.

In last week’s preview I said if Johnny Sexton is fit he should play.  It seems he isn’t but in many ways his absence is tempered by a very exciting young 10/12/13 combination for Leinster in Carbery, Henshaw and Ringrose.  Apologies to the other provinces but all going well this could be a regular starting trio for Ireland in the future and this is a magnificent opportunity for them to audition.

When you take their ability, factor in the wealth of back row talent we have for securing the ball, and add in Luke McGrath’s recent high-tempo form, we should definitely go into this contest with the same attitude we had for our last visit to Franklin’s Gardens in 2013.

Still, we should of course have concerns, not least of which is our lineout.  Devin Toner may have an obvious height advantage but that alone does not secure you ball on your own throw.  With expert timing in the jump this difference can be wiped out and also the dart needs to be spot on - I’d be very surprised if Jim Mallinder doesn’t have this area down as a major target so we must improve on recent form.

Against the Dragons we saw something from Leinster rarely tried by pro Irish teams and I’m often harping on us doing it more often...namely throwing to the prop at the front of the lineout who then returns it to the hooker for a run up the touchline.  It’s something you can really only do once per match, but we should definitely do it in more matches.

Then we have another area I feel the Saints will look to exploit us...physicality.  Of course we have players who can front up, but even though Northampton enjoy home advantage I’m thinking their goal will be to knock us off our game plan from the kickoff...and with the likes of Hartley to come off the bench this could go on for 80 minutes if not checked.  We need to be ready.

When it comes to the Premiership outfit's ability to actually play rugby, well, they definitely have players who can do some damage but I’m not expecting much from them in terms of expansive rugby - Myler never really struck me as that kind of out half.  I’d say we’ll see a lot more carrying by the likes of Monsieur Picamoles and we’ll more than likely need everyone on our bench (which includes two strong back rowers in Ruddock and Conan) to keep them out for the duration.

The bookies like our chances, giving us a rare 3-point edge for a trip into Premiership territory.  It’s definitely a fair shout and as much as I love watching my team score tries I’d take a 9-8 reversal of Northampton’s 2000 final success no questions asked.  I really think we can prevail and my official prediction is a low-scoring victory by a 4-6pt margin.

Best wishes to all lucky enough to be travelling over for the match, here’s to the boys in blue sending them home happy!  JLP

DONT FORGET THE A TEAM!!!

Leinster A suffered a blow with home defeat to Nottingham in Round 2 and they need to get their B&I Cup campaign back on track with the visit of the Scarlets “Premiership Select” (heaven forbid the Welsh be seen copying the Irish in naming their teams!).

Kickoff at Donnybrook is 2pm Saturday so try to head down if you can they are always great occasions and you know how deep our well of talent is running these days!