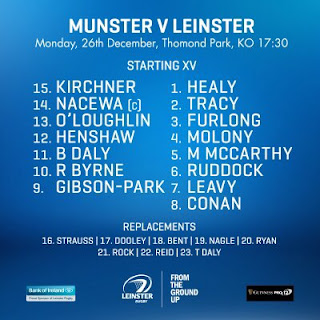 Hi everyone, hope the holidays have been kind to you all…

Before I harp on this evening’s match in Thomond, a quick word to round off our last writeup which featured our trouncing of Northampton at the Aviva - here’s how I concluded it…

...seeing how (Saints fans) were willing to spend their time and money to come over to Dublin to watch their heroes perform, despite the disappointment I fully expect them to be seated in Franklin’s Gardens next Friday whatever the weather.  Sorry Sale fans but I hope they’ll have a home win to celebrate that night.

Turns out it wasn’t quite a full house but hey. 14k in a 15k-seater ground sure isn’t bad and they were treated to a comprehensive 24-5 win which, for now anyway, puts them back in the Euro qualification places so at least there was some return on the investment in resting so many top players.

And speaking of leaving out top players, you could say Leinster are doing something similar for this fixture.  In a perfect world, this makes little sense, given the importance of this fixture not only from a rivalry standpoint but also because the two teams are virtually tied for first place on the Pro12 as we reach the halfway point of the regular season.

With just a five-day turnaround to the visit of Ulster to the RDS on Saturday, I really don’t see how we could be expected to do anything BUT prioritise that match from a selection standpoint.  We know we couldn’t field full strength teams for both matches anyway with “player protection” on top of our injury situation so it really seems like a “no-brainer” to me.

Besides...it’s not as though our starting XV contains any names who haven’t attracted some positive attention at Pro12 (and above!) level this season.   Ross Byrne?  Rory O’Loughlin?  Barry Daly?  Dan Leavy?  Just go back over our writeups for this season so far and you’d see all those names cast in a positive light.

That said, they’ll be taking the field in Limerick against a Munster lineup that not only is very much full strength, but also one that will be keen to atone for falling so agonisingly short at Welford Road last time out.  As if that’s all the motivation they need to beat Leinster!!!

One player I’m especially keen to watch today is Jamison Gibson-Park.  He has shown himself to be a scrum half of extraordinary capability of finding scoring chances where none seem possible.  This is a chance for him to show an all round game to a wider audience than usual...though in this age of big money flowing to English & French clubs maybe that’s not such a good thing.  Hands off!!!

BUT I really do think that if we were offered a losing bonus point from today’s fixture right now, we should take it.  Not that we’ve absolutely no chance, but I reckon Munster have the edge in the required area to prevail.  Bookies have them by 11, I’m saying we get closer to the consolation in a 7-9 point home win.  If we can achieve perfect lineouts on all of our own throws for once, it could be much closer.

Safe travels to all making the trip down the N7!   JLP
#COYBIB