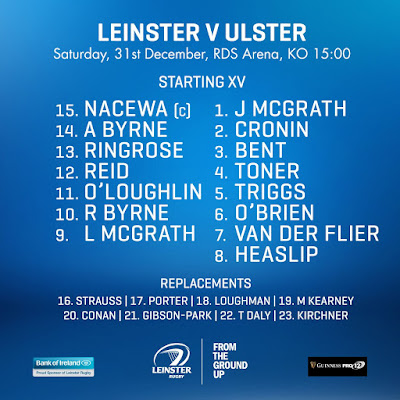 The expectations for these two match selections were pretty much the reverse of what they were for the last round of interprovincials...in other words, a virtually full strength Leinster side up against an Ulster one closer to their “Ravens” or reserve team.

The reality, however, for these two match selections was a tiny bit different.  For one thing, you can hardly call that Ulster backline “second string”, particularly from 11 through 15.  That is where they are going to be at their most dangerous.

Like I said, having Pienaar at 10 makes for an intriguing plan for supplying those backs with regular ball.  Sure, he will probably line out at first receiver more often than not, but I reckon he’ll be more like a “nine and a half” and take over from Paul Marshall at the base of rucks when he deems it necessary.

But to do this, of course, there has to be clean ball for him to use, and that is where Leinster’s strengths on the day come into play.  Despite the wealth of talent we enjoy in the back row, we seem to have settled on Messrs O’Brien, van der Flier and Heaslip as our dream combo and with an in-form Jack Conan poised to replace one of them, we’re looking to be strong at the breakdown throughout.

And as for the younger members of the Leinster lineup, I find it interesting that none of the Leinster starters are in single digits in terms of senior caps so they’re all really starting to settle at this level.  Although it’s a strong backline opposite ours, it’s hardly as though Isa is running a creche!  Those around him know what they’re doing.

In my writeup of the Munster defeat I mentioned Gibson-Park finding box-kicking difficult...ironically as he sits on the bench for this one, I’m not so sure if that’s a tactic we want to be deploying too often especially as Piutau is likely to be on the end of most of them.

The smart way to go would seem to be keeping it in the forwards as much as possible and limit using the boot to little dinks forward into definite spaces behind the defensive line.  But the box kick has become such an integral part of the Irish rugby psyche in recent years so if we do use it we’ll need to be accurate otherwise it could be our undoing.

When it comes to the benches, it seems we also have an advantage.  Ulster do have a recognised out-half available in Brett Harron and Chris Henry is certain no slouch around the breakdown himself but overall I think if we can build a lead going into the final half hour we should be able to bring it home.

According to the bookies, we are favoured by 11 points.  I haven’t seen much improvement in our lineout this season so this could keep the scores close but I do think we have enough for the four match points, if not the five.  I’m going to settle on a prediction of 7-9 points though we’ll need to make the areas in which we have the edge count to the fullest as the Ulstermen as always are keen to turn us over in Dublin.

I’m sampling the “Blue Room” suite with a few mates tomorrow so maybe I’ll see you there or around the ground.  Here’s hoping it’s a happy end to 2016 for Leinster!  JLP
#COYBIB