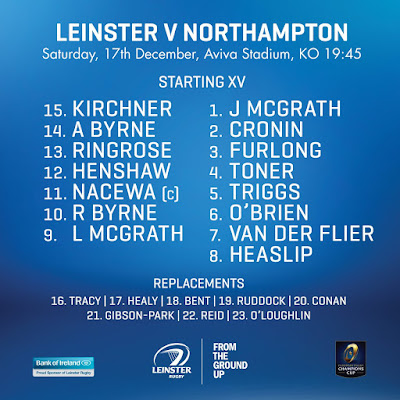 Often as we look ahead to a big sporting fixture, we can’t help but look back in time to a similar meeting between the two teams as if it qualifies as some kind of legal precedent :

I refer the jury to the case of Leinster vs Northampton in 2013, when the plaintiffs were found guilty for resting on their laurels at the Aviva Stadium after laying waste to Franklin’s Gardens only a week previously!!!

Just because it happened then doesn’t mean it’s going to happen now.  Yes, of course we have to be mindful but if we can play the way we did last Friday we’ll at least have every chance of repeating the victory if not the bonus point, though of course that would be extremely handy.

For a brief moment I’d like to remove my one-eyed Leinster hat and make the point that with my overall European rugby hat on, I’d be extremely disappointed if the Saints provide a repeat performance on Saturday night.  They really should be a powerhouse of the European game.  Ok that’s enough for this uncomfortable headwear...back on with the blue one!

Ross Byrne should be fine.  He has ability, he’s got buckets of quality and experience around him both on the pitch and off, and he has shown himself to have mental strength (no matter how many players were on the pitch it took stones to try that crossfield kick let alone make it work).

Last Friday in Northampton Leinster were focused from the kickoff and despite much adversity in backline personnel were still able to find another way to forge ahead.  Looking at the starting lineup, which is similar except for where injury has forced changes, it looks like we’re aiming for more of the same.

And whatever about the different names at certain positions it pleases me most of all to see the same ones at 12 and 13.  Yes, yes, I know I’m running the risk of jinxing us, but we could really do with Messrs Henshaw & Ringrose seeing as much pitch time as possible.  It’s a big ask for any player to expect 80 minutes every time they take to the pitch but the was Leinster & Ireland play these days, we need it from our centres.

Will the Saints try anything different?  Obviously they will make some tactical changes but the one thing they need, extra physicality, was already tried and we all know how that turned out.  If I were Mallinder & co I’d want them to stay competitive, be mindful of discipline and let JJ Hanrahan run everything except the placekicks which Myler can handle.  Whatever they go for I’d be surprised if they were easy to break down.

But with our pack on the kind of form it’s in this weather, it may not be enough.  And if we can plug the leaks in our lineouts, then the bonus point can be within reach after all.  As well as the centres it’s great to see Sean O’Brien able to play again a week later and if this back row trio can stay the same all season, who knows how far we can go.

The bookies have us winning by sixteen.  My wariness about agreeing with them has more to do with superstition than it does rational thought.  I’m going to go with a 10-12 point margin where we only manage the three tries.  That’s based on an improved Saints display and a slightly diminished Leinster one.

With the festive season that’s in it there promises to be a great atmosphere around the Aviva Stadium on Saturday night.  Hope to see you in the Sandymount House Hotel afterwards for a beverage or two for where hopefully you’ll be able to give out to me for wrongly thinking we couldn’t get the bonus point!  The Leinster branding for the match is “Come All Ye Faithful” after all!  JLP

Best of luck to the A team in their own reverse fixture against Scarlets in the British & Irish Cup as well to Leinster Women in their Interprovincial decider against Munster!

Listen to the pod using the player above or better still, subscribe to our feed we're on most major platforms After devoting over a doze...