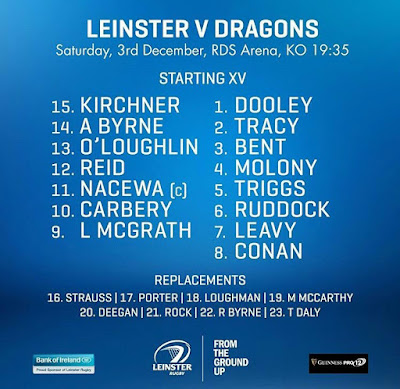 The debate around the Irish ruggersphere was somewhat hijacked by the sudden switch by the Six Nations to bonus points during the week, but this left another interesting topic hanging in the wind.

Should Johnny Sexton take a mini sabbatical from rugby to protect him for the internationals in the spring?

My answer...no.  We already have a player protection programme in place, and given how things have gone for us on the injury front in recent years when big matches roll around, it has done little to ensure we have the best players available for the matches that matter.

If we must restrict the involvement of the “elite” players in the Pro12, fine.  But absolutely NOT in Europe.  This level must be treated like test rugby otherwise no decent coaches will ever come to these shores again - never mind the money spent on season tickets by fans who have more often than not been tempted into making the purchase based on the presence of these players.  If they are fit, they must play IMO.

All that said, this is a very exciting lineup Leinster have ready to go up against the visiting Dragons, who have been more like Dragonflies in our ointment over recent seasons.  There might be a smattering of experience throughout the 23 but it is mostly up-and-comers pretty much all of whom look to have a decent future in the game ahead of them.

There isn’t a single combination on the park that really “worries” me.  All my reservations over Noel Reid have been proven wrong so far this season and his partnership with Rory O’Loughlin looks like it could be a regular feature for us in matches like this one.  As always I’ll be looking for a solid defensive outing to be our bedrock at the weekend, and after what happened in Llanelli last week we can certainly do with it.

Joer Carbery’s rise gets more and more meteoric by the week and should Sexton be unavailable over the holiday period, the youngster will need a strong outing to show he’s ready for what promises to be a bruising back-to-back series with Northampton.  He definitely has a strong back three at his disposal this time around.

Another trio in which we seem to have an endless supply of resources is in the back row.  Having followed Ireland’s November successes you’d almost have forgotten the name Rhys Ruddock and I’m pretty sure he’ll be keen to give us a performance to remember.  Then there’s Dan Leavy who I quite frankly wouldn’t feel badly about starting against the All Blacks the way he has been playing.

We also have some good depth in the front row - Peter Dooley and Michael Bent have put in some great shifts this season and the “next generation” on the bench of Messrs Porter & Loughman have also done well.

The bookies have us winning by 14, though while I do want our defence to be sound, the margin of victory wouldn’t concern me as much as would the bonus point try.  Of course we can’t afford to take these Men of Gwent for granted but if we’re going to be challenging for honours we’ll need maximum points from matches like this one.  I’m going to say yes to the bonus but maybe with a couple of late tries down the other end leaving the margin around 10-12.

Ir promises to be a cold one for an unusual Saturday night kickoff at the RDS but do head along tickets are still available and it promises to be a great evening of rugby.  See you there!  JLP