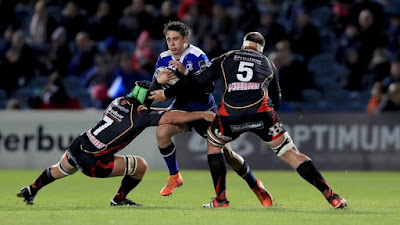 SEND THE A TEAM

It’s hard to deny that for about forty-odd minutes of this contest it was frustrating to see Leinster make so many basic errors and let clear try-scoring opportunities go a-begging.  And that was just the FIRST half!

But I want begin this writeup by addressing something that has been discussed online about this performance, namely our failure to “crack on” after the bonus point try was wrapped up shortly after halftime.
There is absolutely no doubt that we had enough superiority over our opponents on the night to put at least fifty on the scoreboard, and when you consider the rare late Saturday kickoff time for the RDS, those in attendance would probably feel aggrieved not to have more excuses to warm their hands with clapping in the closing stages.

But the theme that keeps recurring here in these writeups is the nature of the European rugby season and the way matches, normally those in the Guinness Pro12, have long shadows cast over them by other contests coming down the line.  This one in particular was really in the dark, being affected not only by what should be two bruising encounters with the Saints, but also a 2017 Six Nations Championship Joe Schmidt will be very much aiming to win.

So with that very important context in mind, was this match ever going to feature a Leinster XV that, barring a catastrophic series of injuries, would ever start a European match for us this season?  I think not.  This was essentially a British & Irish Cup or “A” selection with a few guests from the full team.

They clearly had a remit - secure the win as clinically as possible and don’t leave the bonus point behind should the Dragons leave it there for us.  And while it wasn’t exactly pretty, the plan did come together.

And if we are going to find fault with the things that went wrong, we must also applaud what worked and by that I don’t just mean the four tries we scored - the style rugby we were playing to bring them about must also be taken into account.

The game wasn’t even a minute old when we won a lineout which we took quickly to keep the tempo going.  That set the scene for a procession of fizzed passing to the wider channels, neat offloading in the tackle and following kicks ahead into space to exert the maximum amount of pressure on our visitors, clearly demonstrating that the intent was to “go for the jugular”.

Unfortunately we still haven’t been able to fix our problems in the lineouts, and they were especially bad on this occasion.  Five went astray altogether, and of those, three were in the first ten minutes.  Word must be out that no matter which hooker is dealing them, our darts are worth contesting and we need to sort this soon - it’s particularly concerning when you consider it was a speciality of our head coach in his own playing career.

But on this occasion, we weren’t up against a team that was able to make the most of those advantages.  I didn’t use a timer but if the Dragons had possession in our 22 for a full minute before the break I’d be very much surprised.  Eventually our eagerness to keep a high tempo proved enough to get more than our noses in front as we nabbed fourteen points in the space of just four minutes.

Free kick to Leinster off a scrum; Luke McGrath takes a quick tap.  Shortly afterwards we win a penalty after failure to release in the tackle; our scrum half goes quickly again.  Suddenly we are pressing their line and when a neat offload from Joey Carbery misses Tracy and arrives at Peter Dooley, he evades his tackler and stretches out his arm for try number one.

And we weren’t willing to let up from there.  Many teams after taking the lead would seek to consolidate with a “safe” exit option off the restart...not this Leinster XV.  We run it straight from our own 22 and eventually a neat offload from Jack Conan puts McGrath through again and his run takes us deep into the scrambling Dragons cover.

The scrum half does a sly “behind the back” offload to Triggs and they are well supported as the ball is brought into contact.  Some neat clearing out and deft handling later, it was Ross Molony’s turn to stretch out his arm to dot down.  Just like that we were halfway to our goal.

Yet another score resulted from the next restart only this time it was the visitors winning a penalty after a good follow up to the kickoff, which O’Brien gratefully converted to get rid of the “duck egg” on the scoreboard.  From there it took us a while to get back into the swing of things offensively...losing Noel Reid to injury didn’t help much.

But when a clearance kick from Dragons scrum half Tavis Knoyle went out on the full, we actually made good use of this lineout opportunity, securing the ball before Rory O’Loughlin made a breakthrough; then Luke McGrath found a telling (er, “flat”???”) final ball to man of the match Jack Conan who stretched our lead even further.

Yes, the scoreline at the break was comfortable, but the fourth try was still there to be gotten.  We really needed to start the second period with as much intensity to that we showed in the first.  With 41 minutes still showing on the clock, we had the bonus point sorted.

Again it was O’Loughlin making the break and showing us what a great option we have to play at 13 when Garry Ringrose is otherwise occupied.  The move started with a run of the mill clearance from the Dragons, and when Rory collected the ball he was about 12 metres inside his own half.

To say the Dragons’ tackling was poor would be something of an understatement, but this particular try illustrates just how much our game has transformed since that horrible Sunday visit by the Men of Gwent in February 2015.  On that day, in the same situation, our player would have actually gone out and sought a tackler to run into.

Nowadays, we’re looking to avoid them where possible and I counted not one, two or three but four would-be challengers sent packing on O’Loughlin’s run and he had Isa and Carbery either side of him so he went with his outhalf who was better poised to go in under the posts.

Before you could say “cotton wool”, Carbery was hauled ashore which probably means he is slated to start in Franklin’s Gardens next Friday.  And while that is a shame as Sexton is of course the more experienced option, I really do believe the youngster has the game to make an impact over the coming weeks.

It’s all about his body shape when he gets a chance to run.  He seems to be one of those sportsfolk who are able to make up their mind between multiple options at the last available moment.  He could fizz a pass to a team-mate at just the right angle for him to take it beyond his tackler, or he could bring it himself for a decent gain, and you’re always left guessing.

And another thing is that he seems to have his own style about him...there don't seem to be many trademarked Sexton plays on show.  If Joey can play with the same confidence against Northampton he should do well.

He wasn’t the only player to be substituted after that fourth try...on 53 minutes we had the standard “3 on, 3 off” front row swap and there were appearances for youngsters Oisin Heffernan, Max Deegan and Charlie Rock, in addition who Tom Daly who had replaced Reid.  This left Ross Byrne, himself on for Carbery, pretty much with a third string lineup to bring home for the final half an hour and they found it difficult to get their combinations firing on all cylinders.

Meanwhile on the other side of the ball, the visitors appeared to sense an opportunity to get themselves in contention for a bonus point and courtesy of tries by winger Pat Howard and sub scrum half Sarel Pretorius, they had the last ten minutes to pinch it but Leinster rediscovered their resolve at least in defence and were able to hold them out.

As a spectacle for supporters looking for entertaining rugby, the second half is most definitely best forgotten quickly.  Of course in an ideal world we want to see these players performing to their peak for the full 80 minutes of every encounter, it’s just that maybe it’s a bit much to expect it on each and every occasion.

It’s this Friday in Northampton and the following Saturday at the Aviva Stadium when we’ll more than likely be requiring guts and glory in the final quarter from the boys in blue, and if our best available team can provide it, we won’t be worrying too much about failure to pad the scoreline against the Dragons.  And let’s not forget the actual A team have a couple of matches against their counterparts from the Scarlets as well to get their B&I Cup campaign back on track.

Meanwhile back in the Pro12 we’re level on points at the top of the table with none other than our old buddies at the other end of the N7, and with Ulster and Connacht both winning well at the weekend, it was overall a good weekend for the provinces.

Not a bad way to follow up that successful month for the national team at all.  Here’s to many more plans coming together over the coming months.  JLP
at December 05, 2016