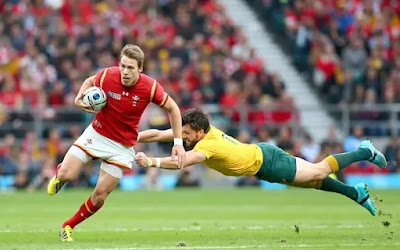 Lions selections are way too early now but lets be honest we are all thinking towards the tour . The following XV are selected on the Autumn Series but will certainly change after the Champions Cup and 6N. Injuries and form will also dictate changes but currently England and Ireland players are out in front due to their performances with their Welsh and Scottish counterparts a fair bit behind overall.

15. Stuart Hogg (Sco) - A menace ball in hand and improving under the high ball.

14. Jonny May (Eng) - Lightning quick and a great finisher, another improved defensively

13. Jonathan Jospeh (Eng) - Another elusive attacker , added strength defensively and a kicking game see him take the outside centre berth.

12. Robbie Henshaw (Ire)  -  A rock , hits like a train and his performance in Chicago was one for the ages. Owen Farrell also has a strong series

11. Liam Williams (Wal) - Easily the best Welsh attacker , would be a strong contender for 15 jersey too , where he should start for Wales. Caused ABs lots of troubles in summer too. Stroppy and abrasive.

10. Jonny Sexton (Ire) - His fitness woes are a concern but he is far and away the most complete 10 in the northern hemisphere.

9. Conor Murray (Ire) - Just edges Ben Youngs, both have improved passing and both know where tryline is , Murrays defence just edges the battle.

8. Billy Vunipola (Eng) - HIs go-forward is paramount to Englands attack, does the dirty yards carrying and improving handling and defence too. His fitness levels have improved immensely since Eddie Jones took over.

7. Josh Van Der Flier (Ire) - Tackle count ridiculous for a guy who played 60 mins in Chicago and last minute recall for inj Sean O Brien in Dublin didn't faze him either, a bolter maybe but this kid has something special. Justin Tipuric has a strong series in a poor Welsh side.

6. Sean O'Brien (Ire) - Another one with fitness issues but when he is on the field is a nightmare for opposition defences , enjoys the challenge of the ABs and have a feeling will play an important role for both country and Lions.

4. Devin Toner (Ire) - Toner had a fine series but to be honest is prob going to lose out to Alun Wyn Jones or Maro Itoje in long run.

3. Tadgh Furlong (Ire) - Had a fine summer tour but took it to next level during the Autumn series , the new bull , or more apt like rampaging rhino knocking Abs and Wallabies aside when carrying . His nuts n bolts work as a prop are improving every game.

2. Rory Best (Ire) - Fine series as player and captain , still feel Jamie George is the most talent player at this positon but Eddie Jones' selection of an off form and unfit Hartley is holding him back.

1. Jack McGrath (Ire) - Mako Vunipola offers more carrying and in terms of handling but give me McGrath's scrummaging , rucking and tackle count everyday of the week and twice on Sundays.

As mentioned earlier this selection will change daily/weekly/monthly , the coaching team's announcement will be interesting to say the least as this will also effect the ranking within the greater squad selections.