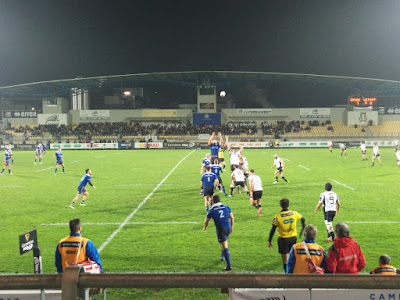 Visitors to Zebre’s home in Parma quickly learn one thing: Rugby is a serious business around these parts.  Football may rule the roost in Italy, but there is a strong rugby playing tradition here in the Emilia-Romagna region.  The legendary Italian scrum-half Alessandro Troncon was sitting just behind us in the stand. The decent sized crowd was vocal and passionate.  Be under no doubt, we were playing away from home, and this was absolutely no gimme.

The game started in dry conditions but within 20 minutes the rain was bucketing down - playing to Italian rugby’s strengths up front.  This made this Leinster performance all the more impressive. Chatting to Guy Easterby before the game he said that the Leinster performance last week against Connacht was probably the best of the season so far.

The really encouraging news was Leinster continued with that form and the younger members of the squad stepped up again, confirming their development and the squad’s strength in depth. 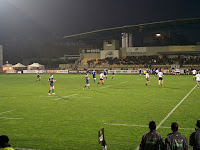 Another pre-match talking point was seeing Nigel Owens out on the pitch warming up. Considering what happened in 2013 when Ireland played the All Blacks it was perhaps good that we had one of the best refs in the world here with us.

Initial exchanges were forgettable but gave you the chance to digest your tortellini, one of the specialities of these parts. It was Leinster who came out on top of those early ping-pong exchanges and the only action of note was two half breaks by Adam Byrne which boded well for the rest of the game.

Leinster withstood the early pressure from Zebre but Mike McCarthy received a yellow card for collapsing a maul and then lying all over the ball. From the resulting scrum Zebre’s no 8 van Schalkwyk got over for the first try of the game which was converted by Canna who stood out all game for Zebre.

Leinster replied on 22 minutes with 14 men, when Ross Byrne dinked a lovely ball over the top to the right wing where Adam Byrne brilliantly caught and offloaded to the supporting Tom Daly running an inside line. A fine try on an impressive debut. Isa had brought his kicking boots and knocked over the conversion to bring the sides level.

Zebre restored their lead on 30 minutes after Sean O’Brien blatantly played the ball on the ground after getting isolated in possession. Canna knocked over the 3 points and Nigel warned Sean that the penalty was on the limit. This was a rare visit to Zebre for Sean and he got through another workmanlike 55 minute shift.

Leinster’s second try started after Ross Byrne brilliantly avoided trouble fielding a Zebre kick, wrong footing two rushing defenders and releasing the ball to Barry Daly who weaved his way superbly from the Leinster 22 to the Zebre one. Quick hands by the forwards allowed Adam Byrne to get into the right corner for his first try of the night.

That try gave Leinster a 12-10 half-time lead and having withstood the Zebre first half thunder gave them the confidence to kick on in the second.

Leinster changed their entire front row on 45 minutes and three minutes later Adam Byrne had his second try by finishing off some great work in the Zebre 22 which stretched the defence and the score looked inevitable. Isa knocked over the touchline conversion to make it 10-19.

At this stage Leinster were getting in the mood offloading and attacking wherever they could. The excellent Gibson-Park nearly got over from a flowing move but managed to get the ball away to Conan who finished a fine piece of team play to secure the bonus point. The conversion made it 10-26 and Leinster were out of sight.

Adam Byrne’s hattrick and Leinster’s fifth try arrived on 66 minutes when he did well to gather his outhalf’s cross field kick, land and swivel to leave the Zebre the full-back and winger for dead. Brilliant from Adam but Mamma Mia was the reaction to the local defending.

Final score was 10-33 and Adam Byrne deservedly received man of the match but academy player Ross Byrne caught the eye with an impressive outing at 10 for the full 80 minutes. A mention also for the irreplaceable Isa who kept talking and communicating throughout to the younger players in front of him. How valuable is his contribution to the Leinster machine especially on potential banana skin nights like this.

The chat in the RDS after the Connacht game was that Leinster are in a good place. Zebre did not test Leinster’s defence in any serious way but Leinster’s structure and shape were there for all to see in Stadio Sergio Lanfranchi. That optimism for the season and bigger challenges ahead was again confirmed in Parma.