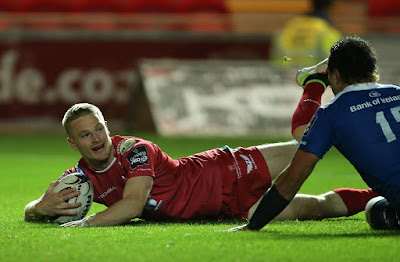 Could see it coming,
didn’t see it happen

Leinster fell off the top of the table with Scarlets moving into the top 4.  In truth Scarlets ran away with the game, with only a brief glimmer of a comeback.  A bonus point provides a silver lining, and it was a learning curve for some young guns.  It also brought some of the new internationals crashing back down to earth.  Now this match was on some strange variation of BBC which I don’t understand and find terrifying, so this review is going to be based on highlights.

Possession was fairly even, as was territory, which suggests Scarlets just used the ball better when they had it.  The tries suggest the same.  Still they conceded 18 turnovers, and seemed to drop considerably for the last 30 minutes.  If this was a full-strength side, that could have proven to be costly for Scarlets.  However, the lead the Welsh side built in the first 50 minutes was more than enough to win them the game.

Johnny McNicholl (who it seems will be a massive player this season) scored the opening try 7 minutes in to his Scarlets career.  It was hardly a beauty, as the ball bounced out of the hands of Richardt Strauss, McNicholl had a free run in under the posts.  Patchell converted it, Scarlets were 7 – 0 up.  The second Scarlets try came from a lineout maul.  Leinster were a forward down after Mike McCarthy had been sin binned, Kruger touched down.  Patchell once again added the extras.  Nacewa got Leinster up and running on the 26th minute with a penalty but Scarlets would hit back.  Leinster were still down to 14, and with the Welsh side camped on their line, Evans crossed over despite the efforts of Isa and Strauss, the lead was 21 – 3.  Leinster would have the last say of the half, Dominic Ryan and Noel Reid both made ground, Richardt Strauss and Adam Byrne traded passes, with Strauss touching down.  He couldn’t get in under the posts and the try was not converted.   At halftime, Scarlets were in front 21 – 8.

The second half began with Leinsters hopes of a comeback being shot down, winger Barry Daly received a red card.  Straight from the restart he took out Aled Thomas in the air who landed badly, hardly intentional but a red card nonetheless.  Scarlets made the most out of their extra man immediately.  McNicholl got an offload away to Steff Evans, he linked up with Aled Thomas, who had Will Boyde outside him.  Patchell converted it, Scarlets had a bonus point and a 20-point lead.  Ryan Elias would touch down for Scarlets 5th, another strong drive toward the line from the pack.  Once again Patchell was on hand to convert.  Leinster would respond immediately.  It seemed to be a lack of concentration from Scarlets after having just scored, Adam Byrne ran a good line ducking a soft enough tackle to get his 5th of the season.  Nacewa converted, the score was 35 – 15.  Tom Daly just about caught up with a grubber kick to cut the deficit to 11 points.  He either touched the ball down with his chest, forearm, or elbow, either way Nacewa converted to make the scores 35 – 22.  I can only assume the next 10 minutes were relatively uneventful, with nothing to show from them in the highlights.  One thing of note is that Oisin Heffernan came on for his debut in place of Michael Bent.  Don Jones kicked a penalty which pretty much ended Leinsters hopes of getting a Losing Bonus point.  They would not go home empty handed however, Andrew Porter was awarded a try.  The grounding was unclear, but the ref asked the TMO if there was any reason he couldn’t award it, clearly there was not.  Nacewa converted it with the last kick of the game to leave the final score Scarlets 38 – 29 Leinster.

A bonus point loss away against difficult opposition doesn’t derail Leinsters season.  In fact, picking up that point where other teams wont will mean a lot at the end of the season.  Nothing really to be too cynical about.  Next up for Leinster is a home game against Newport Gwent Dragons on Saturday.  With internationals returning Leinster should be claiming a bonus-point win.  The good news it is at home and televised on TG4 so at least we can see this one.

As always, leave your thoughts on the game and the season.

You can watch the highlights of Scarlets – Leinster here:
https://www.youtube.com/watch?v=sfhdZFihx7o