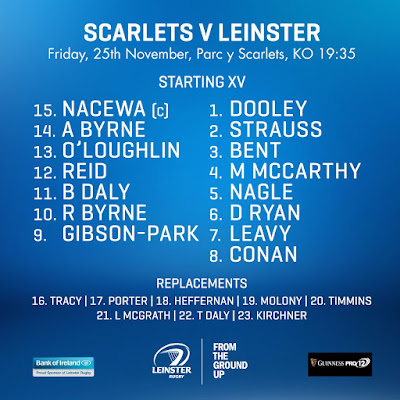 It’s one of those times of the year that is equally confusing and terrifying.  You see a Leinster preview, but that’s not Jeff's name under the headline, that’s somebody else.  Has the world gone mad?  No, it’s just that Ireland are playing, so the Leinster writeup is very much the sibling of somebody doing their leaving cert this week.  I mean it’s not that nobody cares it’s just that there’ll be plenty of time to buy back Leinsters love after the November internationals are over.  This weeks Leinster preview (and hopefully review unless somebody finds out I’ve been hyphenating words in my 8-0 reviews to make them seem shorter), is written by myself, Ciarán Duffy, occasional supplier of garrulous* articles to Harpin’ on Rugby and host of Post to Post.  *I found a thesaurus.

So sit back, and enjoy this non-alcoholic, organic, imitation writeup.  Don’t struggle you’ll only make it worse.

As usual Leinster are hit the hardest in the international window, and the depth of the squad will be put to the test in Parc y Scarlets.  Top of the table by 3 points, things are going well enough at the moment.  Leinster haven’t lost since round 2, coming into the game on a run of 6 wins in a row.  A win here would be the first time since 2013 Leinster will have won 4 games in a row in the league.

Scarlets are in a good run themselves.  Not by any stretch the form they showed at the start of last season, but having lost their first 3 games, they have won 5 in a row, including credible wins over Connacht and Glasgow.  They are only 4 points off Glasgow ad Ospreys, so a win would see them make their way into the playoffs.

Speculation would suggest Leinster could sign Israel Dagg, for now, Barry Daly and Adam Byrne are on the wings.  Byrne is in flying form Leinsters top try scorer with 4 has stepped up after the departure of Luke Fitzgerald and in the absence of Fergus McFadden and Dave Kearney.  Isa Nacewa will captain the side and will in all likelihood take over the placekicking duties, to relief some of the pressure on Ross Byrne, who is making only his 6th appearance.  Noel Reid is the second most experienced of the starting backs, he starts at 12 partnering Rory O’Loughlin.  With Henshaws injury, Reid is likely in for a run of games partnering Ringrose in the centre.  Jamison Gibson-Park starts ahead of Luke McGrath at scrum-half.  Luke McGrath is one of 3 new Ireland internationals in the Leinster side, he is joined on the bench by James Tracy, while Dan Leavy starts as openside flanker.  Dominic Ryan and Jack Conan make up the rest of the back row, with Mike McCarthy and Ian Nagle starting in the second row.  The front row is made up of Peter Dooley, Richardt Strauss, and Michael Bent.  It’s a big game for Bent to remind Joe Schmidt of his presence, Tadhg Furlong has been outstanding as tighthead for Ireland, with Finlay Bealham proving a capable replacement.  With John Ryan in the mix as well, Bent needs to remind everyone he is an option.

The replacements are a further mixture of experience levels.  Zane Kirchner could provide a spark if necessary off the bench, be it at fullback or on the wing.  Tom Daly, Andrew Porter, and Peader Timmins have, 1, 2, and 3 caps respectively, with Oisín Heffernan on course to make his debut.  The 29 caps Ross Molony make him seem like a veteran by comparison.  Considering 5 of the starting lineup have 6 or less caps, big performances will be required by Kirchner, McGrath, Molony, and Tracy when they are called upon.

Scarlets make one change from the team that beat Glasgow 20 days ago.  Johnny McNicholl makes his debut, having arrived from Crusaders.  Scarlets will be looking to build on last season and cement a top 4 place, which they are very capable of.  IF the make it to the semi-finals, a bit of silverware will be in their grasp.  Being the only Welsh side in the Champions Cup they will be looking to break the habit and actual progress from their pool, most likely by finishing 2nd above Toulon but behind Saracens.  There is potential for a strong season after a slow start for the Welsh outfit, and Leinster are a hurdle they will look to overcome.  Along with the debuting McNicholl, Will Boyde, Steffan Evans, and Jonathan Evans will be their main scoring outlets.  Equally the boot of Rhys Patchell will be vital.  Defensively, James Davies has the most turnovers in the league this season with 10.  Dan Leavy is on 9, the winner of the battle will go a long way to deciding the game.

The last 5 of times these teams have met, the home side has won.  I have gotten this far without using the phrase ’baptism of fire’ so I’ll try keep it that way.  It’ll be a difficult test for some of Leinsters less experienced players, but as we remember well, squad depth was key in the boys in blues dominance over Europe.  Plenty of talent on show, and it’ll be the job of Isa, Reid, McCarthy, Strauss, and Ryan to spearhead the victory.

Want to see your own rugby opinions on the web?
Click "Write for us" in the sidebar to find out how.