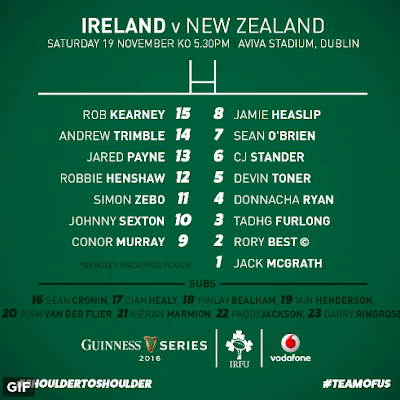 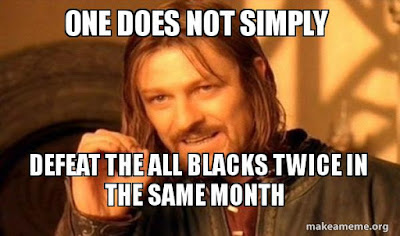 Yeah, I know what you’re thinking : “Lord of the Rings references?  REALLY?”

But hear me out...I do both a preview AND a writeup for every Leinster & Ireland match and this season we have not one but TWO clashes with New Zealand.  So how could I possibly avoid mentioning the epic movies that were filmed there?  I’ll tell you what...I’ll get them all out of my system in this preview’s pre-amble and I promise you won’t see them again.  Deal?

As you can see, I have already covered the first movie “The Fellowship of the Ring” with my Sean Bean meme.  When it comes to “The Two Towers” we need look no further that the All Blacks’ addition of Brodie Retallick and Sam Whitelock to their lineup; we all know that’s going to make a massive difference.

Finally we have “Return of the King” and I am reminded of the “Eye of Sauron” being fixated on Frodo & Sam as they approached Mordor...what happened in Gondor Chicago has only served to make Steve Hansen & co all the more motivated to turn us over, so hopefully Joe Schmidt & his fellow coaches can be like those giant eagle things that conveniently appear to get our heroes out of seemingly impossible situations.

Right - *deep breath* I’m done.  I promise.  Just in case you’re worried I’ll stray into The Hobbit, you can be sure I won’t because much like that trilogy itself, quoting from it would be overkill for this preview!

Much like my thoughts before the last encounter, I reckon we have to ignore what we think our opposition is going to do and focus on our own game-plan.  Of course that is made more difficult by the nature of the historic result last time out - it’s like we have a “get out of jail free” card in that the monkey is off our backs regardless of what happens Saturday.

But imagine this...if we can get a result this time, we can go for at least an entire year saying ”We haven’t lost to the All Blacks since 2013!”.  Pin that to the dressing room wall, Joe.  You’re welcome. ;-)

Seriously though...I wouldn’t put it past this particular coaching ticket to have had completely separate playbooks for these two tests before we ever got on the plane to Chicago, but even if that’s not the case it will be fascinating to see what they do differently on Saturday.

We certainly can’t have many complaints about the matchday 23 being very similar to last time out, but the tweaks are interesting.  Jordi’s long-term layoff combined with both Sean O’Brien and Peter O’Mahony’s return to match fitness provided Joe with a dilemma - just how best do we shape our back row?

Given that the All Blacks have expressed much admiration for the Tullow Tank in the past, I’d say starting him could well be the right way to go.  I’d give him every carry for the first five to ten minutes then use him as a decoy the rest of the way to keep them guessing, but I’m sure Joe has something much more elaborate (and suitable!) in mind.

As for O’Mahony, he is very unlucky to lose out though somebody had to and once you settle on Seanie there’s really nowhere for the Munster skipper to go but the bench, where the poaching prowess of Josh van der Flier could be valuable and the youngster has shown already he can provide useful cameos wearing green.

When it comes to the rest of the pack, I’m assuming we’re not going to get as many chances from All Black lineouts as last time but if we can keep things solid on our own put ins, that may not matter.  Smart play calling will be key and I reckon we’ve generally been pretty good at that in recent times. Also while it's a shame for Dillane personally to miss out, we don't lose anything with his replacement Iain Henderson, that's for sure.

In the backs, Joe has his dream team in both the 9/10 and 12/13 combos.  Simply put, the more minutes those four are on the pitch, the better our chances.

Finally there’s discipline.  Just four penalties conceded last time out?  That is amazing.  Can we do that again?  I have a feeling that one difference we’re going to see in the All Blacks this time is going to be that they’ll be in ref Jaco Peyper’s ear at every opportunity so we’ll need to be extra vigilant.

Overall, I’d be very confident in our defence to keep them out once it’s set.  I’d also be confident in our ability to generate some points of our own from attacking situations.  The time we should be tested most is right after turnovers or at quick tap penalties...the All Blacks will be like a coiled spring ready to let loose at those times and what we do in reply could make the difference in the final tally.

But one thing is for sure...it’s going to be a momentous occasion at the Aviva Stadium.  The bookies are more optimistic than last time, shaving their perceived margin of All Black victory down to “just” 16 at time of writing.  I’m not going to say we’ll win this either, but just to be awkward, I’m going for a 26-all draw, with Paddy Jackson converting a Garry Ringrose try 2 minutes after the clock goes red.   My predictions aren’t usually that specific but I reckoned I owed you after all the Tolkien talk earlier ;-)

The entire rugby world will be watching - it is by far and away the biggest match of November Series.  If you’re lucky enough to have a ticket be sure and give your all for the boys in green, they’re going to need every decibel we can muster for the full 80 minutes.  But just no Mexican waves, ok?  JLP

PS - Don't forget the Women's Internationals at UCD - Ireland play Canada on Saturday at 2pm; plenty of time after to make it to the Aviva - get to both matches if you can!!!