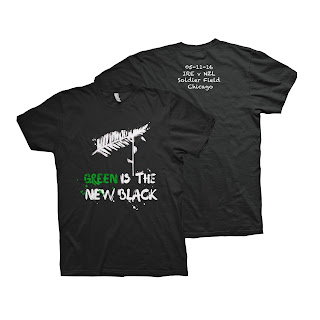 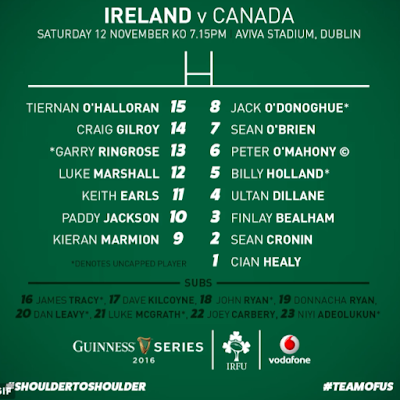 Go on, admit it, you’re thinking it too, aren’t you.

Hey, it’s ok, we’re Irish fans, that’s what we do.  It’s perfectly natural to have thoughts like that, and remember it’s only a passing one when all is said and done, so there’s no need to feel too badly about thinking it.

“Wouldn’t it be ironic if, just a week after ending the 111-year haka hoodoo, we lost to Canada?”

I appreciate why the mind can work like that - just to make sure the thing doesn’t actually happen, we need to say it, if not actually out loud, then at least in our heads.  And in an extra bit of superstition, you’re not going to see me going completely in the other direction guaranteeing it won’t come true.  As I write I have a plentiful supply of “should”s, “probably”s and “I’m hoping”s on hand to keep me from tempting fate too much.

Still, you have to be confident, I’m hoping.  This is a particularly exciting group of Irish players, some of whom who are playing their way back towards the full squad, others who have played their way into contention for same.

If there was one thing about the selection that would give me reservations, it's the “Possibles” nature of it.  Joe Schmidt & co rely on a strict set of systems that involve every cog in the machine working together.  But when you’re trying to make an impression so you can be involved in more lucrative contests like the ones over the next two weeks, it’s only natural to be a bit more selfish at times than normal.

But while I’d say we will see evidence of that on Saturday evening, it shouldn’t be enough to hurt us that much.

Paddy Jackson is pulling the strings and will no doubt be keen to knuckle down from the start to show us the kind of form he did in South Africa.  He will be working with a back three all of whom have been shown they can come good on the big occasion, but it’s in the centre where I will be most interested.

I’ve been following the career of Garry Ringrose since Blackrock’s march to the Leinster Schools title in 2013.  And at every level he has played since then, he has shown almost from the first play of his first match that he belongs.  He has great coaches all around to prepare him for an occasion like this, but I’m not so sure he necessarily needs it.

Then there is Luke Marshall, who has had dreadful luck with injury and I’m delighted he’s getting another chance to make an impact.  It helps to have his Ulster team-mate at 10 and hopefully he and his centre partner can make it through the 80 minutes.  We know that Joe is looking for a particular set of skills from his 12 and 13 so we’ll see how well they work together on that score,

In the pack there’s a ton of experience and it’s great to see Peter O’Mahony back in green, leading out the side to boot.  This is a strong ball-carrying group of 8 we’ve assembled so the backs may very well find themselves with cleaner jerseys than they’d like come full time!

On the bench it’s great to see Dan Leavy get a call up, as with van der Flier also doing well you’d have been worried there may not have been opportunities for him.  With Seanie likely to be in the frame for next weekend, the plan could be for at least half an hour for Leavy to show what he can do.

I watched quite a bit of Canada before RWC2015 (they played about a gagillion warmup games).  Assuming they play pretty much the same, they like to forge some space for their wingers and when they do, they can wreak some havoc.  But as we saw in our pool match last year, we should have enough in our locker to keep them out.

The bookies have us as 38-point favourites, though the particular company I used for research favoured New Zealand  in Chicago by 23 points and paid out on Hillary Clinton a month ago!  Still, while retaining all the superstition mentioned earlier, my official prediction has to be an Irish win, though I’d probably shave about 10 off the spread and make it 28-30 pts with possibly a late score or two for the visitors to keep the margin down.

So that’s it...here’s to a great welcome for the boys in green back at the Aviva...oh and by the way, can anyone confirm we’re to have a more conventional performance of the anthems?  JLP