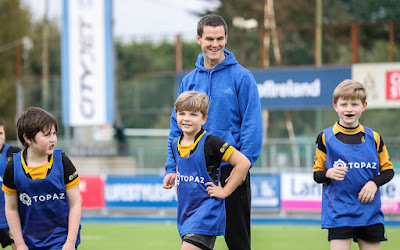 Topaz Energy is delighted to announce Letterkenny Rugby Club of Letterkenny, Co. Donegal as the grand prize winner of the 2016 ‘Cash for Clubs’ initiative.

After signing up to the community promotion, which saw club members collect tokens by fuelling up at Tobin’s service station, Letterkenny, Letterkenny Rugby Club was randomly drawn as the overall prize winner and awarded the€10,000 jackpot.

A number of Letterkenny’s youngest club members were recently invited to Dublin to receive the prize on behalf of the club before being treated to a private tour of the Aviva Stadium.

As well as experiencing the home of Irish rugby from behind the scenes, Letterkenny’s minis were also joined by Topaz Cash for Clubs ambassador and Irish rugby star Jonathan Sexton for a surprise skills session which was held in Donnybrook Stadium, the home of Bective Rangers where Sexton himself played mini rugby until the age of 12.

Chairman of Letterkenny Rugby Club, Michael MacGinty said: “When I first heard that we had been selected as the overall winner I didn’t believe it! For us it’s like hitting the jackpot to receive a cash injection like this, which will go toward future proofing the club and our facilities. This Topaz Cash for Clubs prize will not just go a long way in protecting the club’s legacy, it will also go far in supporting the local community.’’

Margaret Barron, Marketing Director of Topaz added: “With over 440 service stations across the island of Ireland, Topaz is very much at the heart of Irish communities, providing daily services across a 32 county network. With that, we understand the value of clubs of all shapes and sizes and the difficulties they face in raising much-needed funding.

Topaz Cash for Clubs was first introduced to acknowledge those difficulties and reward the tireless work carried out by club members across Ireland when it comes to fundraising, by offering an all-inclusive platform which ensures everyone’s a winner. In Letterkenny Rugby Club, we have a very worthy grand prize winner. The commitment the club and its members have shown has been fantastic and we congratulate all involved, while we look forward to seeing the funding go to good use in the development of Letterkenny’s facilities.”

Details on all of the winners from this year’s Cash for Clubs initiative across Ireland are available online.  For more, visit https://www.playorpark.ie/cash-for-clubs/clubs and www.facebook.com/TopazEnergy