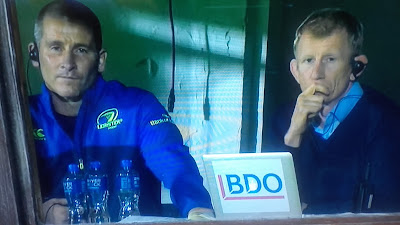 If you were to look at 2016’s previous meetings between these two sides like they were feature films, the trilogy would definitely have an “epic” look about it.

First on New Year’s Day in the swirling winds and driving rain of Dublin, the valiant underdogs were kept scoreless by the evil blue demons, complete with a controversial try.  Then in March the men in green fought back to snatch a victory in Galway but still the “bad guys” went on to finish atop the league table.  Finally the tale had its happy ending in Edinburgh with the overall season’s spoils deservedly going to Pat Lam’s heroes.

So where does Saturday’s fixture fit in that saga?  Is it a laboured attempt at a fourth instalment to keep the franchise going?  Actually I’d rather characterise it as a “reboot” of the original, something that Hollywood has been known to do many times in recent years.

And for this new version, the part of the villain (always, always Leinster in this example...there’s no avoiding it I’m afraid) has the same basic elements to its character in some ways but in others, appears to have undergone a complete makeover.

Still we’re relying on our greatest weapon of recent seasons, our defence or as I call it the “fifteen-headed blue monster” - and that is what earned us the four match points on the day, with the visitors not quite shut out like they were back in January, yet still kept from scoring for 66 minutes.

The main difference between now and then is that despite a large change in personnel which included an completely different back line (back then we started with Rob, Ferg, Garry, Ben, Dave, Johnny & Eoin), we were able to comfortably enough build a points total on our side of the scoreboard which meant there could be no doubt as to which side deserved the victory.

And looking back on the match what is most remarkable about the display was that by the end of the first quarter, it looked to all intents and purposes like Connacht were well on their way to another bit of history, namely a rare triumph in Dublin.

The early exchanges showed the teams to be evenly matched in most areas although Leinster were the first to blink, shipping a couple of kickable penalties at one end while rediscovering our attacking lineout yips down the other.

But who remembers that early 6-0 lead for Connacht now?  Almost from the restart after Jack Carty slotted that second penalty it was like we were able to raise our game another 5% in all the right areas and the moment we got on the scoresheet, there really was no turning back - plus if anything the Sean O’Brien sin-binning seemed to increase our mojo levels, though that is of course not meant as a pop at him at all.

Don’t get me wrong...watching the match live (in front a practically-full RDS as well which was great to see), things didn’t seem that comfortable for us and it certainly wasn’t a case of the Westerners handing things to us on a plate, far from it...in fact, they had a move or two where a bounce of a ball in a different direction could have made for a completely different match altogether.

It’s just that watching back over it a second time, there was something about the way our approach evolved throughout the 80 minutes...almost an organic process whereby we were adapting to what they were trying on us and slowly but surely we were able to squeeze the life out of their attack, while at the same time making the most of our visits to their end of the park.  For me, that comes pretty darn close to a “perfect” display and isn’t even tarnished by the meaningless consolation try at the end.

The performance overall was so impressive from Leinster I’d say the best way to review it would be to go over every position grouping to make sure nobody gets left out.

I have two downsides to this display and one was that of our inability to take a simple option on attacking lineouts, something that dogged us in the early stages of the season and came back to haunt us in time for Halloween.  Bulk of the flak should probably go to Sean Cronin but it is a group exercise involving lineout caller & lifters as well.  Thankfully the two early mishaps didn’t hurt us.

The rest of the time, both sets of front rows were on top form, making strong carries and tackles, and most importantly, getting a crucial nudge in the scrum which got us off the duck-egg and helped us on several occasions throughout the match, including the second try.  In fact, if we had a ref more inclined to award penalties at scrums (not really John Lacey’s thing) we might have had even more points on the board.

The best job the likes of Kearney and Nagle can do is minimize the amount we miss big Dev and two dodgy lineouts aside, they certainly played their part.  As for McCarthy, I feel bad saying this because it doesn’t sound good but I really do think his most effective role for us these days is off the bench, and this shift proved it.

Our riches in this area grow more embarrassing pretty much every time Dan Leavy gets game time.  Fully deserved man of the match award for the way he was able to pick breakdowns that were ripe for turnovers like he’s been playing at this level for years.  Seanie wasn’t exactly a slouch at this either and both look like they could do some damage against the All Blacks...then there’s a chap called van der Flier in the mix as well?

Conan deserves a mention also for some strong carries and a deft little kick forward which put us right on their line ahead of our first try.

My second overall little niggly criticism would be of Gibson-Park’s box kicks, a tad too long and will need to improve, but don’t let that take from the fact that every other facet of his game seems perfectly suited to the way we play and he is particularly adept at picking out try-scoring passes when we’re attacking deep in the opposition 22.

Carbery played yet another steady 10 and could well find himself playing in Soldier Field next weekend; cliché or no that would complete the ultimate “meteoric rise” given he was lining out for Clontarf in the AIL earlier in the year.

The fact that Connacht had to resort to crossfield kicks was a sign that this pair (plus Carbery inside them) were keeping that centre channel pretty much locked down tight and even an early appearance off the bench from Bundee Aki couldn’t make a difference.  Hopefully O’Louhglin’s late knock isn’t too bad because this would be a useful pairing to see us through November.

Talk about saving the best for last!  Leavy definitely deserved man of the match but this trio, who got all of our points, weren’t far behind.  On the wings we had more talent to have made the rise through AIL and Leinster A levels to finally show they can get the scoreboard moving in the Pro12 as well.  Both took their tries in professional fashion but they also go through a fair amount of work defensively.

And as for Isa...wowza.  Kicking goals from everywhere, keeping an eye on things from the back, and getting us out of a couple of tight spots with some audacious scrambling.  I wouldn’t see any need to make any changes in this area going to Parma next weekend.

Particular mention should go to the coaching.  Something I felt was lacking at Leinster in previous years has been our failure to find an intelligent path through a game that combines the plans we had made with those laid out by the other team.  Now it seems to be something we’re getting right every week and long may it continue...can the credit go to the addition of Stuart Lancaster?  I’m thinking so.

So here we are at the end of October, top of both the Pro12 AND our European pool.  Naturally not everything is perfect but what we can say is that there seems to be good work being done behind the scenes to get us there.  And as I have been saying consistently this season, we need all the wins and league points we can get now because we have a stinker of a run-in for our final four matches.

After a festive weekend which should have me looking for horror movie references to use for my writeup, the only ones who should be scared right now appear to be our upcoming opponents because if this blue monster continues to thrive it will only be Leinster living happily ever after as the credits roll on this season. JLP
at November 01, 2016