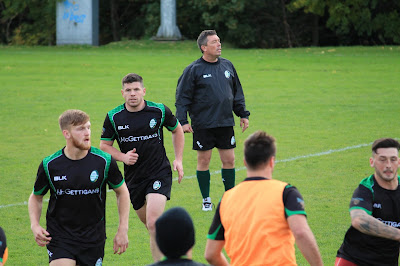 Ireland coach Mark Aston has warned his team they will have to be at their best to counter the formidable physical threat posed by Russia in Saturday’s winner-takes-all Rugby League World Cup qualification clash in Bray.

This is one of the biggest weekend’s in Irish rugby league history, as the team seeks to secure automatic qualification for the World Cup, while off the field Rugby League Ireland is hosting the Rugby League European Federation annual congress with delegates from all European countries arriving on Friday.

Aston has made two changes to the team which defeated Spain 46-6 in Valencia last weekend. Warrington Wolves duo Joe Philbin and debutant Toby King – who will play alongside his brother George – replace Haydn Peacock and Parramatta prop James Hasson for the Group B decider at the Carlisle Grounds. Hasson has had to return to Australia for pre-existing commitments.

Toby King (20) comes in at centre, with Ollie Roberts moving to loose forward, while second row Philbin replaces Peacock on the bench. There are 12 Super League and Championship players in the Ireland squad, alongside five domestic players.

The winners of the match will secure automatic qualification for the World Cup in Australia, New Zealand and Papua New Guinea, while the losers will face a qualification play-off against either Wales or Italy.

Mark Aston said: “This is another big challenge against Russia who had an impressive win against Spain. They’re a big and physical outfit and we need to keep our standards high as I thought against Spain we let them slip. We’ll be looking for high completion and playing with plenty of tempo, that holds the key to our success.”

Aston added: “The players are really looking forward to getting the job done this weekend at home in front of our passionate fans. Then we can start planning for the 2017 World Cup.”

A large number of supporters from Ireland’s Russian community are expected to attend the game, including the Russian Ambassador, providing a true international flavour to the match.

Russian head coach Denis Korolev said: “We understand how difficult this match is going to be but at the same time it is very significant for us. We have ironed out a lot of the mistakes we made against Spain and we are ready to fight for the victory.”

The match coincides with the RLEF annual congress, with 40 rugby league representatives from throughout Europe casting an eye on how the game is progressing in Ireland.

Richard Egan, Director of Rugby League Ireland, said: “We are delighted to welcome Rugby League International Federation CEO David Collier and Rugby League European Federation leader Maurice Watkins to Ireland and as well as the 40 delegates from many European countries.

“The agenda will cover the opportunities and challenges in the game and will be a great event for people to mix and share views.  The attendees will take in some of what Bray and Co Wicklow has to offer and will then be guests at the Ireland v Russia World Cup qualifier game in The Carlisle Grounds in Bray. I would also like to thank McGettigans and The Royal Hotel, Bray, for hosting the event”