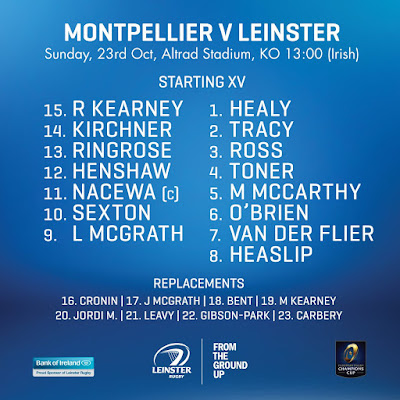 UPDATE SATURDAY : Mike McCarthy illness rules him out, Mick Kearney to start with Ian Nagle on the bench

It’s going to be a tough weekend for Irish rugby, of that there is no doubt.

The focus of the weekend will be on Thomond Park on Saturday lunchtime and we can be sure that the place will be full of Munster fans looking to pay their respects to their fallen hero in every way they can.

Later that afternoon, Leinster A continue their British & Irish Cup campaign with the first home match, as Nottingham, currently lying 11th in the 12-team RFU Championship, visit Donnybrook complete with former Leinster A and Munster player Jordan Coghlan, now plying his trade as an openside flanker.  We’re hoping to “live-blog” this match from 2:45pm, stay tuned.

Then on Sunday the senior side have arguably their toughest test of the pool campaign when they visit Montpellier.  I say “arguably” because I am now feeling conflicted about that claim though I was sure of it when the draw was made.  That’s not to say I don’t think Montpellier will be tough, I just have a feeling that the Saints might prove trickier as they will probably look to disrupt our own game rather than impose their own.

But as for our side of things, there are some welcome returnees to our lineup and it is a very interesting matchday 23.  I was impressed with the Carbery/Henshaw/Ringrose axis against Castres but once Johnny Sexton is match fit you can hardly consider leaving him out and the backline has a very promising fluidity to it.

It’s in the pack where the big returns are happening, most notably Sean O’Brien.  After a relatively tame 40-minute outing last week in the A team’s demolition of Richmond, there’s no easing the Tank back in by adding him to the bench...he gets straight out there and it’s interesting to see him at 6 while retaining van der Flier - that back row has an “ideal” look about it for Leinster, unfortunate though Ruddock’s injury might be.

Finally we have Mike McCarthy back and he also goes straight into the starting lineup.  I think he has been very good for Leinster in recent times but I have to feel for Ross Molony, who effectively has been demoted to the A team despite doing well at senior level whenever called upon, particularly when it comes to pinching lineouts.

With young James Ryan also getting a start at Donnybrook and Kearney, Nagle & Triggs also in the mix to accompany Big Dev in our ideal starting lineup, I wouldn’t be surprised if other clubs started looking to turn some heads as I can’t see us carrying that much experience and talent in that position into next season.

Back to Sunday...there is no doubt that Montpellier will be a tough proposition.  Jake White has done a good job assembling a deep squad.  However, they have had their problems, not least with White himself who will be leaving the club at the end of the season to make way for Vern Cotter.

They have also had bad luck on the injury front, with Bismarck du Plessis ruled out earlier in the season, regular outhalf Catrakilis felled a few weeks ago and most recently losing their influential goal-kicking scrumhalf Benoît Paillaugue for whom Tomás O’Leary has been called in as a “medical joker”.

Despite these issues, they still have many threats.  Any of us who have watched Super Rugby in recent years will know how much Nemani Nadolo can hurt you on the wing; he scores tries out of virtually nothing.  But where we need to be most on our guard is at scrum time.

We did well in this area against Castres but Sunday will be a different “prop”-osition altogether.  MHR are well stocked either side of their hooker and I have seen them devastate their opposition more than once this season particularly with their Georgians.

And with Francois Steyn’s long-range boot at their disposal, basically any scrum around the halfway line can quickly become points for them so from the off we’ll need Messrs Healy & Ross to be at their very best.  I really don’t think this is a match for a “scheduled” prop substitution on exactly 50 minutes...we may need up to 70 minutes at least from Ross.

When it comes to the bench we have a “6/2” split much like our visit to Cardiff a few weeks ago.  And with Sean Cronin being held over it really does look like we’ve been put together with the assumption that we will be needing points in the closing stages of the match and that really does seem to be a smart option.

The bookies fancy the home side by 5 and officially I’m saying 3, but I still firmly believe we can win this especially once we can get ourselves on the board early.  If we can get anything close to parity at the scrums I reckon our defense could well frustrate them and once we’re able to take our chances we can definitely pinch this one.

It promises to be a cracking contest and there’s every chance we could see four wins for the provinces...how awesome would that be on this weekend in particular.  JLP