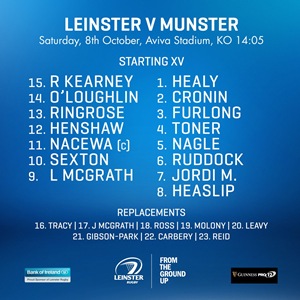 Before I get to the preview I want to make one thing perfectly clear.


Of the six matches being contested this weekend in the Guinness Pro12, Ulster’s visit to the Sportsground tonight is hands down the “tie of the round”.  There can be no disputing this when you look at the league as a whole.  Top of the table with 100% record travels to the reigning champions?  Argument over.


In the Scottish, Welsh and Italian press they may disagree, and I suppose you can’t blame them as their readers will be more focused on their own clubs...but what about here in Ireland?  Should the historical rivalry between Leinster and Munster be a trump card over any facts surrounding Ulster v Connacht?  We certainly don’t think so here at Harpin Manor.


Having said that, our remit is to cover Leinster rugby’s progress and every weekend we offer a preview of their match, then tweets throughout it, a sampling of the general online reaction afterwards and finally our own extensive writeup on the Monday.  So please understand that while we may not offer much in the way of analysis when it comes to events in Galway or indeed any other matches this weekend, it doesn’t mean we’re ignoring their importance.


OK - on to matters at hand.  2pm is a bit odd - not quite a lunchtime kickoff, not quite a traditional afternoon one...but when it’s these two teams locking horns, I doubt the fans mind too much.


Naturally the name that jumps off the team sheet and hits you square on is that of Robbie Henshaw - ironically that’s exactly what we want to see him doing to all that comes down his channel on Saturday.  We have given Noel Reid a bit of stick in the early weeks of the season and he certainly did much to put his hand up in Cardiff last weekend but it has to be said it’s good news for both Leinster & Ireland to see the new signing lining out.


Elsewhere in the backline it must be a massive boost for Rory O’Loughlin to be starting...he’s another who did well for himself in the centre last time out but is well able for a wide role as well.  It is also of course great to see Rob Kearney back from injury and he most certainly needs a few standout displays this month to show he is still in the running for a test spot.


Personally I’d have gone for Gibson-Park ahead of McGrath at 9 but there really isn’t much in it, and having both available guarantees a steady supply of quick ball for Johnny Sexton to deploy the set moves he’ll be bringing into the contest.


When it comes to the pack, the absence of Josh van der Flier is strange enough (due to “Schminutes” according to Leo) but the presence of Jordi Murphy at 7 when Dan Leavy has shown himself well capable of performing openside duties is even more so.  Still, Jamie Heaslip is known to vary his breakdown role depending on who is around him and he’s well able to take up the slack if Jordi plans to play his normal game.


I just saw a comment on my Facebook timeline : “This is probably the strongest Munster side to face Leinster in a long time”.  Certainly can’t argue there.  Despite many unfortunate retirements and changes in the backroom, they now have the look of a side that’s closer to their late-noughties best again.


You certainly can’t have any complaints about a back row that involves Stander, O’Donnell and a returning Peter O’Mahony, that’s for sure.  And despite the fact that there are two Leinster loose heads in contention for the Irish number 1 jersey, I have always liked the ability & attitude of Dave Kilcoyne ever since I first saw him in a British & Irish Cup semifinal at the RDS back in 2012.


Of course as far as both these sides are concerned it’s not all about the match points on the day...Leinster have tricky Champions Cup contests in the weeks that follow.  Having followed the progress of both Castres and Montpellier closely in recent weeks it is critically important that our defensive standards are where we’d expect them to be and I fully expect “Rassie”’s men to put them full to the test.


Prediction time.  You really shouldn’t ever expect these games to be anything but close.  The bookies say Leinster by 4 and I’m inclined to agree in that I reckon the home advantage could well sneak us over the line.  If we continue the improvements we showed last Saturday we might even deny the visitors a bonus, but I expect this to be a battle to the end so I’m going for a home win by about 3.


Here’s to some exciting rugby this weekend for all Irish fans, and indeed throughout the competition.  See you at the Aviva I hope.  JLP

Don’t forget Leinster ‘A’ are also in action on Saturday ahead of their latest British & Irish Cup campaign…they face their Ulster counterparts at Donnybrook, kickoff 7pm and tickets will be available on the gate.