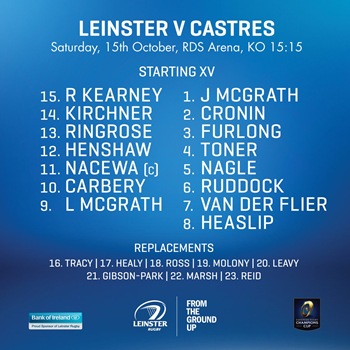 It goes without saying that unless you’re the reigning champions of a particular competition, you always want to do better than you did the previous season.


Believe me...the last thing I want to do is to drudge up our pool performance from last year, but still I feel I must.  And it’s not the record of one win in six that it most depressing for me...it’s the brace of devastating results against Wasps that sting the most.  Pun fully intended.


Now it’s not like I’m deluded into thinking we can just jump straight back to our 3 titles in 4 years glory just like that either...all I’m saying is that despite the good things that happened after we exited last year’s competition (top of Pro12 ladder, reaching final, Ireland win one in SA...remember I said good not great!) and the steady improvement in our Pro12 in recent weeks, I think it’s important for us to show that the demons from those two results have been sent to Coventry.  Again, pun intended.


So for me it is important that we make something of a statement against Castres Olympique on Saturday,  Which leads me to this question...can we do that without Johnny Sexton who must sit this one out with a tight hamstring?


Joey Carbery has done very well so far this season, and I don’t just mean in the matches he has started.  And while I am in no doubt that our French opposition will be much happier to see his name against the number 10 than Sexton’s, we have seen enough of the youngster to know that he does have natural ability when it comes to directing a backline.


And it’s not as though there’s a lack of experience around him...Luke McGrath might be only in his second year at this level but there’s Jamie, Isa, Zane and Rob there to keep him where he needs to be though he does appear to have the temperament required for this level.


What about our opposition?  Well I have been following Castres’ Top14 exploits quite closely in recent times...in fact, just last Saturday they played our opponents next weekend, Montpellier.


Truth be told, while much of the personnel may have changed, in overall approach to their game they don’t appear to be that much different to the side we faced in recent European campaigns.  Basically, everything seems to run through their number 9, Rory Kockott.


Ah, but he is only on the bench this time around, I hear you cry.  Indeed he is.  But...you certainly cannot underestimate his replacement Antoine Dupont.  Bound for Toulouse next season, he is a very similar player to Kockott in that he likes to keep the tempo going...in fact if anything he’s even sharper.


So as I pointed out in my Munster writeup, assuming we keep our defensive organization, what we must look out for on Saturday most of all is their desire, unlike our southern cousins, to act extremely quickly whenever they get a sniff of our tackling systems not being set.  The more they turn our back three, the more hay they can make.


In our pack things could hardly look more settled, so much so that we can afford to let Sean O’Brien complete his rehab in relative peace over in Richmond with the A squad.  Ian Nagle has done well since returning from injury and could have a long-term lock partnership with Toner.  And the only concern I’d have over our front row play would be our lineout darts and this too has improved in recent weeks,


But the one key area for us this weekend is in the centre.  Henshaw and Ringrose as a combo alway seemed to be great on paper but only last Saturday did they actually appear together and with one exception when Garry couldn’t collect a grubber for a certain try they certainly did not disappoint and will no doubt get better.


I have a feeling Carbery will be more inclined to put them through with footwork & well-timed passes than via the boot so here’s hoping we can keep our visitors on their toes both with and without the ball for 80 minutes - nothing less than that will do for us even if our pool is considered “easier” than last year’s.


Which brings me to predictions.  .Just to clarify...I generally make this based on Leinster playing to the standards I have seen recently and the opposition playing to their fullest.  For this reason I’m going for Leinster by 7-9 points.

The bookies are more optimistic and have us by 12 and if we succeed in shutting Castres down and manage to put a decent amount of points on the board early, we could even beat that, but I’m still remaining on the conservative side of the fence, a sentence I never thought I’d write about myself ;-)


Look forward to seeing you at the RDS, always a special occasion and the boys in blue should be looking extra sharp in that new European kit.  JLP